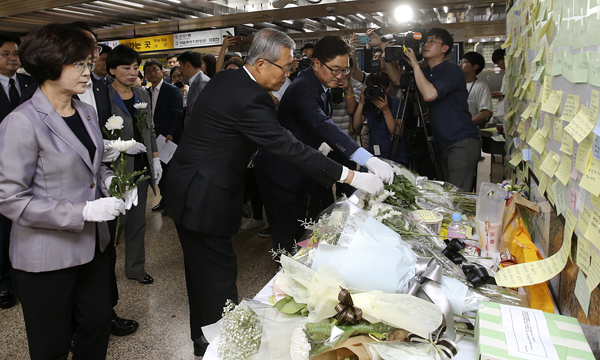 Leaders of the Minjoo Party of Korea, including the party’s acting chairman, Kim Chong-in, center, lay flowers at Guui Station in northeastern Seoul on Tuesday to mourn the death of a 19-year-old maintenance worker. The mechanic died Saturday after getting stuck between a platform door and incoming train while trying to fix the door. [NEWSIS]

Leaders of political parties paid visits on Tuesday to Guui Station in northeastern Seoul to mourn the death of a 19-year-old maintenance worker. He was crushed by a subway train on Saturday while working on a malfunctioning platform door at the station.

The victim, surnamed Kim, was an employee of a subcontracted maintenance company for Seoul Metro, a public corporation of the Seoul Metropolitan Government that operates subway lines No. 1 through 4. He was hit by an arriving train at about 5:57 p.m. while working on a malfunctioning door.

Kim was working by himself, in violation of the safety manual, which requires a team of two to work on platform doors. Workers are supposed to only work on the outside of doors during subway operation hours and report to the station before working inside the doors.

Kim started working for Eunsung PSD, a company specializing in platform door maintenance, as a trainee in high school. He was hired as a contract worker after graduation and had been working for the company for seven months.

His demise struck a chord with the public after it was reported that cup-style instant ramen was discovered inside his bag, hinting at a meager existence. A part of a platform at Guui Station became a shrine to the victim, with members of the public leaving sticky notes and white flowers. The shrine was moved to a different part of the station Tuesday afternoon.

Poor working conditions for contract workers is becoming a flash point in Korea, as their proportion of the working population grows and the proportion of salaried workers erodes.

Contract workers are paid less than salaried workers, even doing the same jobs. Contract workers, also known as irregular workers, have a contract that is valid for a certain period of time. If the company does not renew the contract, the worker is dismissed.

Sim Sang-jeong, chairwoman of the Justice Party, was the first among top politicians to visit the station and lay flowers on Tuesday. She said the young worker’s death was not merely the tragic death of an individual, but a murder caused by a callous society.

“We must fundamentally change a society that mass-produces tragedies,” she said. “Seoul Metro’s irresponsible, indiscriminate outsourcing practices caused the death. And Seoul Metro is not the only company with such dangerous practices.”

She demanded that Seoul Metro and the Seoul Metropolitan Government hire all of its safety and maintenance workers full-time and not subcontract the work.

But the People’s Party co-chairman, Ahn Cheol-soo, got in hot water over a Twitter post that was considered insensitive. On Monday night, Ahn posted a series of tweets about the fatal accident, one of which read, “If he could have afforded just a little more, he probably could have chosen a less dangerous job.”

That prompted some furious replies. “Even if you have to choose the worst job ever out of desperation, you should not lose your life while working at it,” said Jeong Jun-yeong, a former policy director at the Youth Community Union, a youngsters’ labor group. As criticism spread, Ahn deleted the tweet.

The floor leader of the ruling Saenuri Party, Chung Jin-suk, also made a visit to the station.

It was a step forward from Seoul Metro’s earlier promise that it would start a subsidiary in August to directly maintain platform doors in subway stations and end outsourcing of that maintenance work.

“This tragedy woke us up to the brutal reality that our youngsters are facing,” Park said. “As a member of the establishment, I take my responsibility to heart. The cause will be thoroughly investigated, and those responsible will be held accountable no matter how high his or her position is.

“I am fearful that so many young laborers are trapped in a vicious cycle of low wages and irregular jobs due to management efficiency,” he said.

Labor unions and civic groups held a joint press conference on Tuesday to demand an investigation and fundamental changes to Seoul Metro’s business practices. They said contract workers are repeatedly dying while no one takes responsibility, and the only resolution to the situation is direct employment instead of outsourcing.

“The Seoul Metropolitan Government and Seoul Metro said the safety manual prohibits a maintenance mechanic from working alone and blamed the victim,” they said in a press statement. “But it was a murder caused by a structural problem. The root cause was not a violation of the work manual, but the practice of outsourcing, subcontracting and choosing the lowest bidder.

“Working on tracks must be banned during train operation hours to protect the laborers, and all maintenance workers must be hired directly,” the statement said.

Kim’s mother joined the press conference and said it was unfair for Seoul Metro to use an unrealistic safety manual and blame the victim for violating it. She said she would not allow her son’s funeral to be held until Seoul Metro offers an apology.

The current safety manual, introduced after a tragic death in 2013 of a subway inspector, says a team of two workers must work together. There are, however, only six mechanics to repair platform doors for 49 stations north of the Han River. One worker was normally assigned to each subway line from 1 to 4 - violating the safety manual - while one was on call at the office of the subcontractor. Another worked in the situation room, Hwang Jun-sik, a subcontractor employee, told JTBC on Monday.

Kim was not the first worker to get crushed between the platform door and train after the guidelines were adopted. A similar case occurred in August 2015. The victim was working alone.