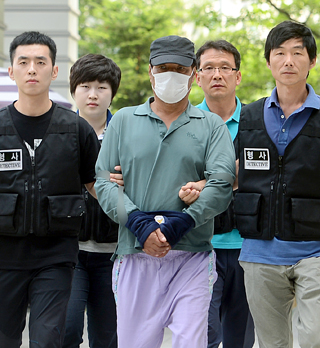 A man, surnamed Kim, suspected of murdering a senior adult at Mount Surak on Sunday is taken into custody at the Seoul Northern District Court in northern Seoul on Tuesday for judges to determine whether to issue a detention warrant. [NEWSIS]

While hiking Mount Surak early Sunday morning, a 60-year-old woman was allegedly stabbed to death by a man who had recently been released from prison for murder.

According to the Seoul Metropolitan Police Agency on Monday, the suspect, surnamed Kim, was sentenced in 2001 for committing murder in North Jeolla and was released on Jan. 19 after serving a 15-year jail term.

Kim turned himself in on Sunday after allegedly killing his victim at 5:30 a.m. on the trail in Sanggye-dong, northeastern Seoul. Kim has so far complied with the investigation by the Nowon Police Precinct in northern Seoul.

“Although the exact motive of his felony isn’t known yet,” said a police officer who is in charge of the case, “the suspect has confessed that he had made up his mind to kill the first person he ran into on the mountain that day.”

“I was familiar with the surroundings in the area because I had once worked as a utility worker there,” Kim told police. He also said he had taken a subway to Nowon on May 16 in order to sleep in the park, where he met his victim.

“For 16 days in Seoul,” he said, “I lived off water and the betting money I won from a horse race.” His quality of life and the fact that he turned himself later that same day has prompted officials to wonder whether Kim committed this crime in order to escape poverty by being sent back to prison.

“We have found bloodstains both on Kim’s jacket and the knife picked up in the Sanggye-dong area and both samples contain the victim’s DNA,” the Nowon precinct police officer said. “We have also secured closed-circuit television footage showing Kim purchasing the knife.” Police requested a detention warrant for Kim on Monday.

Mount Surak trail, the scene of the crime, is covered by a heavy canopy and typically quite dim. There are no closed-circuit television cameras, emergency alert bells or phones in the area.

“If someone absolutely has to hike alone, it’s advisable that they carry a whistle and stay on the designated path on the mountain,” said one official from a police station in Seoul.

“There is less chance for crimes to be witnessed on mountains and also fewer opportunities for potential victims to call for help,” said Lee Yoon-ho, a criminal psychology professor at Dongguk University.

The professor added, “Hikers can minimize these risks by not hiking alone.”

Lee Soo-jung, a criminal psychology professor at Kyonggi University, stressed the role of the correctional system in preventing such crimes.

“Surveillance and crime prevention in the places like mountains is too difficult,” the professor said. “Adult criminals, much like juvenile criminals, should be put on probation to prevent crimes like these from taking place.”