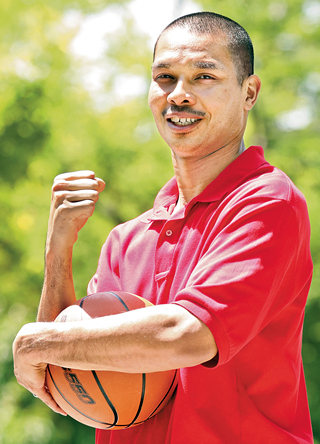 At the age of 40, Moon Tae-jong would seem on first glance to be past his prime on the basketball court.

But the small forward for the Goyang Orion Orions, better known among Korean fans as “the man of fourth quarter” for all his buzzer beaters and clutch shots over the past few seasons, has proved himself as an invaluable asset for the team. This year, he helped the Orions become Korean Basketball League (KBL) champions for the first time since 2002.

Despite his contributions to the team, the six-foot-seven forward has regularly faced retirement rumors after each season because of his age. But instead of leaving the court for good, he chose to sign a one-year free agent contract with the Orions in early May. The news caught everyone by surprise.

“I am glad to be given an opportunity to take another shot at the championship,” said Moon. 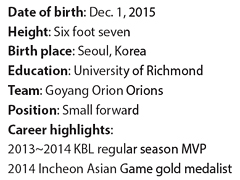 Moon, a former U.S. citizen, and his wife considered moving back to the United States, particularly since their two sons also have basketball ambitions. But Moon says he’s not finished playing for the Orions just yet, and his family agreed to let him give it another go.

“My ultimate goal was to win a championship,” said Moon when asked about the retirement rumors. He added that retiring without a championship ring would have left him with regrets. But now that he has the honor, he says he’s just trying to enjoy the sport.

If the Orions hadn’t won the title last season, though, things likely would’ve been different for Moon and his family.

“We would have left for some place else where our family can settle in more comfortably,” Moon said, claiming he would have considered signing a free-agent contract with another team instead.

Moon is optimistic about the Orions’ chances next season, and he attributes their past successes to the team’s chemistry.

“For instance, we know what everyone else is about to do in games before they actually do it,” Moon said.

“The KBL has a special meaning for me,” the forward said. “It’s about realizing my mother’s dream.”

As the son of Korean mother, Moon says playing in the KBL is as much about basketball as it is about reclaiming his cultural identity. 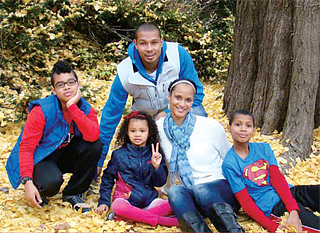 Moon Tae-jong and his family looks forward to the next season. Moon says the support by his family is the main driver behind his decision to stay with the Goyang Orion Orions one more year. [MOON TAE-JONG]

Moon entered the KBL after his younger brother, Moon Tae-young, joined in 2009.

Moon Tae-young, who currently plays for Seoul Samsung Thunders, is one of the most prolific scorers in the league.

The 2013-2014 season was an especially a memorable one for the Moon family. While Moon claimed the regular season MVP award, his younger brother Moon Tae-young, who was playing for Ulsan Mobis Pheobus at the time, received the final series MVP award. Moon says he had never seen his mother so elated before.

Moon says the past few years in Korea have been filled with experiences he will treasure. But he knows the end of his career is near. Once he leaves the court, he hopes to be remembered as a player who always wanted more and was able to get off crucial shots when his team was in a bind.

In the meantime, though, Moon was clear when asked about his goals for this potentially final year.