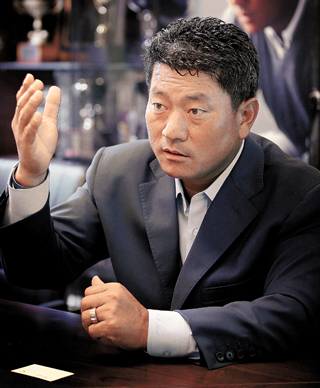 Choi Kyung-ju discusses his vision for the upcoming Olympics at Rio this year. [OH JONG-TAEK]

Choi brings to the team 22 years of experience as a professional golfer.

“Everyone who’s going to be in Rio for the Olympics for golf knows who I am,” Choi said. “That will come in handy. I think I can shield my players from all the mental tensions among the golfers.”

Choi was confident assuming the management post for the Olympics team. “Seventeen years in the PGA, it hasn’t been easy. I will pass down everything I learned from the big stage to my players. I’m positive that we will be able to add at least one medal for Team Korea.”

At the upcoming games, golf will be included as an event for the first time since the 1904 Summer Olympics in Saint Louis. The rosters for the men’s and women’s golf teams are decided based on the world rankings. While four female players will head to Rio, only two of Korea’s male golfers will find their way to Brazil. At the moment, An Byeong-hun at No. 27 and Kim Kyung-tae at No.37 are likely to travel to South America in August.

Choi has been nicknamed “tank” due to his physical strength ? the player was once a professional powerlifter who was squatting 350 pounds at 13 years old. He debuted as a pro in 1994 and has claimed more than 20 titles around the world throughout his career, including five in the Korean Tour, two in the Japan Tour, six in the Asian Tour and eight in the PGA. Choi has always been a tenacious player, and is known for his willingness to challenge himself while also remaining humble and gracious.

Rising to the prominence with his brilliant performance, Choi is considered one of the most successful golfers in Asia today. After winning the 2011 Players Championship, Choi was ranked within the top ten in the PGA, and is the only Korean to have ever been ranked that high for so long.

Now, at the age of 46, he is a veteran in the game. And as a seasoned golfer, he has much to offer to younger players.

“I am sure everyone will be nervous since this is their first Olympics,” said Choi. “It only takes about two rounds of golf to figure out how their plays are impacted when they are tensed up. I will find out the strengths and weaknesses of the players and train them accordingly. I am sure that what we work on together will help the players even after the Olympics.”

Choi says one of the biggest dangers will be getting caught up in any mind games.

“Some players will make bizarre comments or even try to provoke Korean golfers. They cannot be naive and respond softly.”

He says it is rare for veteran golfers to pass on their secrets to junior players, but adds that he thinks its integral for younger players to develop.

Older golf fans might remember the clutch bunker shot Choi made at the AT&T National in 2007. Choi eventually went on to claim the title of the event. Indeed, the bunker shot is one of Choi’s signature moves. “Many players try to evade bunkers by going around it, neglecting the fact that they might get a chance for a birdie if they hit across it,” said Choi, hinting the bold style of play that he will instruct his players to go with.

Choi is a devout Christian, but he says he does not want to continue to play golf in heaven. “I want to rest when I get there,” said Choi with a smile.