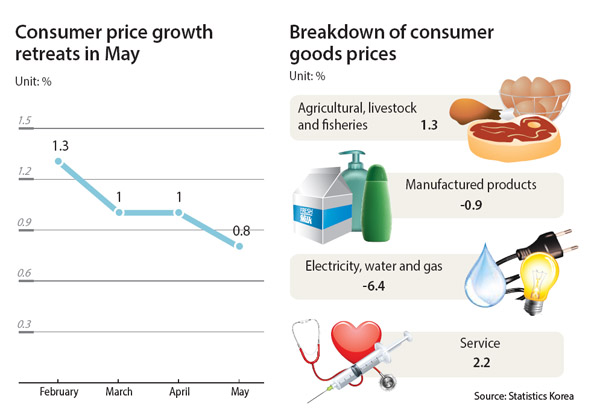 Consumer prices increased by less than 1 percent for the first time in four months, as fresh produce prices stabilized in May.

The country’s consumer prices rose 0.8 percent last month compared to a year ago, according to Statistics Korea. The last time inflation was this low was in January, when the price index grew 0.8 percent.

The statistics agency cited a sharp decline in fresh produce prices as the primary contributor to the lower inflation. The overall consumer prices on food, including agricultural produce, livestock and fishery products fell from a 5.5 percent hike in April to 1.3 percent in May, while prices of fresh produce rose 3.5 percent during the same period, slower than April’s 9.6 percent increase.

“As vegetables that were collected from this year’s first harvest were supplied in the market, the prices of agricultural produce have stabilized,” said Woo Young-jae, director of the statistics agency’s price statistics division. “The prices of Napa cabbage and onions have gone up, but when compared to the same month a year ago, that increase has slowed down.”

The price of Napa cabbage, an important ingredient in kimchi, continued to rise in May but eased to a 43.4 percent growth compared to April’s 118.3 percent spike. White radish prices grew 59.3 percent.

However, not all food prices eased over the sharp increases of the previous month. Korean beef prices continued to grow, and in May, the price of hanwoo was up 19 percent. Garlic prices saw a sharper growth of 57.2 percent last month.

Subway bills surged 15.2 percent, and bus fees were 9.6 percent higher than a year ago.