Chaebol increase their subsidiaries by 18

Chaebol increase their subsidiaries by 18 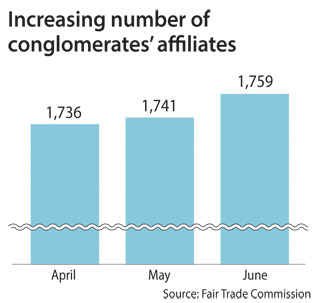 According to the Fair Trade Commission on Wednesday, 33 companies were made affiliates of 13 conglomerates, including the country’s largest brokerage firm, Mirae Asset, along with LG, Kumho Asiana and KT.

LG Group made Farm Hannong, a company that specializes in crop protection products and fertilizer feeds, an affiliate after purchasing 100 percent of its shares for 424.5 billion won ($356.3 million). LG also acquired smaller affiliates that operated under Farm Hannong, which boosted the number of its new affiliates to nine last month.

On the flip side, 10 conglomerates, including Hanwha, Posco and Shinsegae, lost 15 affiliates through mergers, selling them or shutting down businesses.

Posco sold its affiliate Posco LED, which was established in 2010 to specialize in industrial lighting, to a consortium led by E-Mart. It merged its Posco Green Gas Technology affiliate, which specializes in synthetic natural gas, into the main company, part of a corporate restructuring that has been in progress since last year.