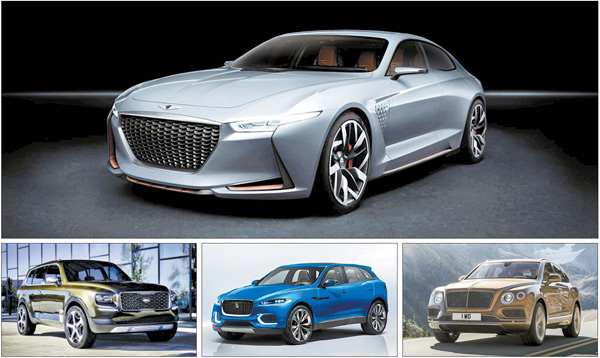 The biennial Busan Motor Show kicks off at Bexco in Haeundae, Busan, today, with 25 domestic and foreign carmakers showcasing more than 200 of their latest models, including five that are having their premieres in Korea.

The vehicles exhibited in the eighth edition of the automotive event will offer a glimpse into what will be available for prospective buyers in the remaining six months of the year, as competition between Korean and foreign vehicle brands heats up.

Hyundai Motor and Kia Motors, the two top Korean players under the Hyundai Automotive Group umbrella, have come up with notably differing strategies.

Big brother Hyundai, eager to jump into the global luxury-car pool, is seeking to promote its premium brand image with high-end models, while the smaller Kia is stressing its eco-friendliness.

One of the models that Hyundai is unveiling to the Korean audience for the first time is the New York Concept, a four-door coupe with a sloping roofline that appears inspired by the likes of the Audi A7 and Mercedes-Benz CLS. It debuted at the 2016 New York Auto Show in March.

The country’s top carmaker will also take the wraps off the G80, which comes in both gasoline and diesel versions. It is a face-lift for the Genesis DH, a popular luxury sedan in the United States that once outsold the Mercedes-Benz E-Class.

The model features an autopilot function, which has been available only with the EQ900, and its sales are scheduled to begin in July.

Another attention-grabbing model is the RM16 concept, an upgrade from the mid-engine Veloster-based show car that debuted last year.

“We aim to raise our foothold in the premium vehicle market with the G80, alongside another flagship sedan, the EQ900,” a Hyundai spokesman said.

Based on a modified Sorento chassis, the five-door concept is powered by a 3.5-liter (1-gallon) gasoline engine and an electric motor generating 130 horsepower. The K5 and K7 variants are set to hit the market sometime in the second half.

GM Korea is exhibiting its second-generation Chevrolet Volt, an electric vehicle that is able to travel 80 kilometers (50 miles) on a single charge, 30 to 50 kilometers longer than ordinary electric vehicles on the market. The model is set to go on sale in the latter half of the year.

Renault Samsung will be presenting a midsize QM6 SUV, a full-change follow-up to the QM5. The new model is set to be shipped to about 80 countries.

The carmaker, which operates a factory in Busan, will also show off the Twizy, a battery-powered ultra-small electric vehicle that comes in two models - a single-seater and a two-seater. Renault began selling the model in Paris and other global markets in 2012, but it has failed to reach Korea because of local safety and other regulations. The model is able to travel 100 kilometers on a single charge and boasts a maximum speed of 80 kilometers.

A reflection of the popularity of import vehicles, the size of the exhibition space assigned to foreign brands exceeded that of their Korean counterparts for the first time. Three import brands - Bentley from the United Kingdom, Man Truck and Bus from Germany, and Yamaha from Japan - are making debuts.

All domestic carmakers except for Ssangyong Motor are set to be at the event. Even though the carmaker posted profits for the first two consecutive quarters of this year, it declined to join the show - for the second time. In 2014, Ssangyong made a last-minute decision not to participate in the Busan Motor Show in protest of the host’s decision to assign a space for the carmaker in a different exhibition hall than the other Korean automakers.

The company did not elaborate on the reason for its absence.

From the foreign sector, Honda, Volvo, Hanbul Motors of Peugeot and Citroen, FCA Korea of Fiat and Chrysler, and Porsche did not show up, a repeat of 2014. The automakers cited the effectiveness of shipping the vehicles from Seoul and renting a space at the venue, a cost that runs in the billions of won, as reasons.