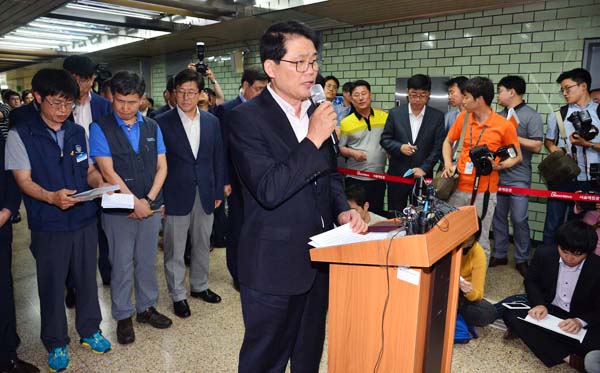 Chung Soo-young, head of the Safety Management Headquarters of Seoul Metro and acting president of the company, makes a public apology at Guui Station in northeastern Seoul and promises to reinforce safety supervision at a press conference on Wednesday. [NEWSIS]

The employer of the teenage subway mechanic who was killed by an arriving train on Saturday routinely made its engineers to work alone, in violation of the safety manual, internal records of the company showed Wednesday.

The 19-year-old maintenance worker of Eunsung PSD, surnamed Kim, was hit by an arriving train while working on a malfunctioning platform at Guui Station. Eunsung PSD is a subcontracted maintenance company for Seoul Metro, a public corporation of the Seoul Metropolitan Government that operates subway line No. 1 through 4. Although Seoul Metro’s safety manual requires a team of two to work on platform doors, Kim was working alone at the time. Workers are also supposed to only work on the outside of doors during subway operation hours and report to the station before working on the inside of doors.

The JoongAng Ilbo obtained Wednesday the record of Eunsung PSD’s maintenance operation for June 2015. The monthly report, partly hand-written by the mechanics, showed that engineers were sent alone in 48 out of 195 dispatches.

“This shows that Seoul Metro has an extremely poor sense of safety and supervision over its contractors,” said Seoul Metropolitan Council Rep. Choi Pan-sul, who provided the record.

Suspicion was also raised that the company tried to cover up its safety violations by doctoring reports. On June 4, 2015, one engineer worked on a sensor at Euljiro-3-ga Station, the dispatch record, handwritten by respondent, showed. But the company’s archive report had an additional name. Similar cases were also discovered in the archive.

Seoul Metro admitted it loosely enforced the manual because of a worker shortage. The current safety manual, introduced after the death in 2013 of a subway inspector, says workers must work in pairs. And yet, a mechanic who was working alone was killed at Gangnam Station in August 2015 by an arriving train while repairing a platform door. The victim was an employee of Yujin Metro Com, another Seoul Metro subcontractor.

An official of Eunsung PSD also admitted that it often failed to meet the safety requirement.

“Before the Gangnam Station accident last year,” he said, “we didn’t have enough mechanics, so when there are many malfunction reports at one time, we can’t send two workers.”

As public rage snowballed over the repeated deaths of Seoul Metro’s contract workers, the company admitted Wednesday its responsibility and offered an apology. It said its poor supervision of the site and subcontractors, structural problems concerning its outsourcing policy and an unrealistic safety manual caused the tragedy.

“In addition to the two previous deaths, another accident recurred and a precious life was lost,” said Chung-soo-young, head of the Safety Management Headquarters of Seoul Metro, acting president of the company. “I am very sorry and embarrassed to say that we are preparing an improvement measure only now. But with deepest remorse, I promise that no such accident will ever occur again.”

The company said it will also start a joint investigation committee with the Seoul Metropolitan Government and punish all responsible officials. Outside experts and labor union members will also join the 11-member committee to ensure fairness and transparency. The committee will investigate not only the accident, but also the feasibility of the safety measures, the implementation of the manuals and overall maintenance operation.

Seoul Metro also said it will hire enough workers for its subsidiary, scheduled to open in August in order to directly manage the platform doors, so each team will have two workers. Subcontractor employees will all be automatically hired by the subsidiary.

A control system to stop incoming train cars when workers are on the tracks to repair doors will also be built by the end of this year. Seoul Metropolitan Police Agency also said Wednesday it will create a special investigation team to probe Saturday’s death as well as Seoul Metro’s management of its subcontractors. The mission was directly ordered by Seoul Police Commissioner Lee Sang-won as criticism snowballed about the subway operator’s poor supervision.

The police also said it is wrapping up the investigation into the death of the Yujin Metro Com mechanic at Gangnam Station in August last year. Gangnam Police Precinct, in charge of the probe for nine months, said executives of the company were suspected of ordering its workers to lie to the police about its safety violations.

According to police, the workers testified that the victim, when he was dispatched to Gangnam Station, went with a partner, but they later recanted and admitted that he went there alone. Police arrested two executives of the company on charges of involuntary manslaughter and will ask the prosecution to indict them. Police also said Seoul Metro lied about the accident.

The subway operator claimed the victim did not report his intention to work on the tracks alone and that if he had, he would not have been allowed to do so. But surveillance TV footage showed that he stayed in the station office for about one minute with a Seoul Metro official, apparently informing him of his plan. The Seoul Metro official was also charged with involuntary manslaughter.