Korea ‘dismantled’ by Spain in friendly

Korea ‘dismantled’ by Spain in friendly 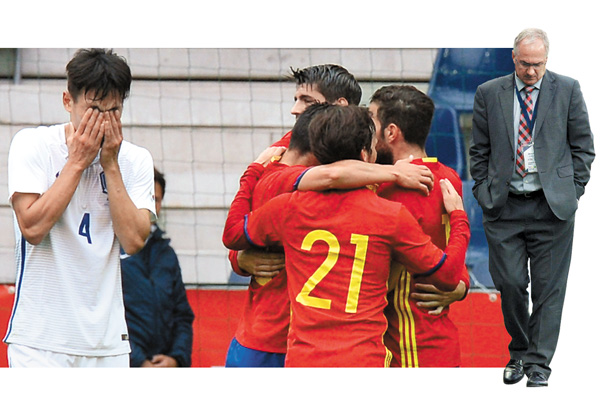 Spain routed Korea 6-1 in a friendly on Wednesday, leading some Korean football fans to wonder if the team is ready for the final round of regional qualifiers for the 2018 World Cup in Russia. Many were also pessimistic about the team’s performance once it actually gets to Russia, calling this most recent loss a “disaster.”

During the match Wednesday in Salzburg, Austria, Spanish forwards Manuel “Nolito” Agudo and Alvaro Morata combined four goals, three in the second half, to shatter Korea’s eight-game winning streak. Wednesday’s result is the most disappointing in terms of the goals conceded. The Korean side hasn’t given up six goals in two decades, since losing the Asian Cup quarterfinals match against Iran in 1996 by 6-2.

The Taeguk Warriors put up a solid showing against the Red Fury early in the first half. The defensive side steadily blocked Spain’s attempts to score and the offensive side did not shy away from attacking. Korea even came close to scoring the first goal of the match, with Nam Tae-hee cutting the pass from Spain in the midfield to find Son Heung-min in the seventh minute. Son’s kick off his left foot went wide.

Son’s shot attempt, however, was as close as the Korean national team came to scoring during the first half of the match.

But as Spain’s trademark Tiki-taka style of play came alive, in which a team focuses on maintaining possession for as long as possible, Korea began to crumble.

The first goal came in the 29th minute, when Manchester City’s David Silva curled in a brilliant 25-meter (82-foot) free kick from the top of the penalty box that left the Korean side paralyzed.

Spain added another goal only two minutes later when Korea’s goalie Kim Jin-hyeon fumbled the ball inside the penalty box, which Cesc Fabregas was able to exploit to collect an easy point.

The quick back-to-back goals threw Korea off its feet, and the team seemed unable to regain their composure for the rest of the match.

Korea’s lone goal didn’t come until well into the game, when second-half substitute Ju Se-jong scored in the 82nd minute.

Throughout the entire match on Wednesday, the Koreans were out-possessed by the Spanish and could do nothing but run around the field chasing after the ball.

It was as much a defeat in stamina as in tactics, and European media didn’t shy away from criticizing the Korean team.

Marca, another Spanish sports daily, also said, “Spain was superior throughout and used the final 15 minutes of the first half and the first 10 minutes of the second half to stamp their authority on the affair. Only a late South Korean goal spoiled what otherwise would have been a perfect match from La Roja.”

Stielike wasn’t going to blame anyone but himself after the game.

“I have no problem with people saying that today’s result is my responsibility,” Stielike said after the match, according to Yonhap News Agency.

“Instead of talking about each player’s performance, our team in general was not good.”

Although Stielike attributes the loss to himself, the players begged to differ.

Team captain Ki Sung-yueng said it was the “players’ poor showing” that killed the Korean team.

“If we can’t overcome these kinds of mistakes, we won’t get a good result on the international stage,” he said according to Yonhap News Agency.

“In football, anyone can make mistakes, but we should try to reduce mistakes to become a better team.”

Ki, who’s considered the key playmaker for the team as the central midfielder, was not able to get off any notable plays, even though he played full time for the Korean team.

“Stielike took a risk by pulling up the defensive line all the way up to the midfield,” said Han Jun-hee, a sports commentator for KBS.

“His mistake was sticking to the same tactic even in the second half. There was no player that was up for the task to give directions to the players in the field.”

Wednesday’s defeat brought to mind the games before the 2002 World Cup. Korea’s team surprised the entire world by advancing to the semi-finals of that tournament, but it did so only after losing 5-0 to both France, in the Group Stage of 2001 FIFA Federations Cup, and the Czech Republic in a friendly several months later.

The national team was then managed by the much-hyped Guus Hiddink of the Netherlands, and the losses both disappointed and outraged the public.

Even though that team proved it was possible to come back from a big loss, the anger and disappointment rings true today.

“We’ve seen a similar incident with Hiddink in the past, but at least the team back then worked hard,” wrote one commenter on Naver Sports, a sports forum operated by Korea’s largest Internet portal Naver.

Yoo Sang-chul, a player during the matches in 2001-2 who now coaches for Ulsan University, cited the importance of the manager’s role moving forward.

“The manager must keep the players’ spirits up after such a devastating loss. Hiddink did just that.”

This defeat aside, the national team has performed decently since Stielike took charge 20 months ago. And some have said this latest loss had more to do with the timing, as Korea took on Spain just two days after landing in Europe, giving the team little time to adjust to the time zone and fully recover.

Korea’s team now needs to reflect on what went wrong Wednesday and make changes before the the next friendly against the Czech Republic, which is slated for June 5.