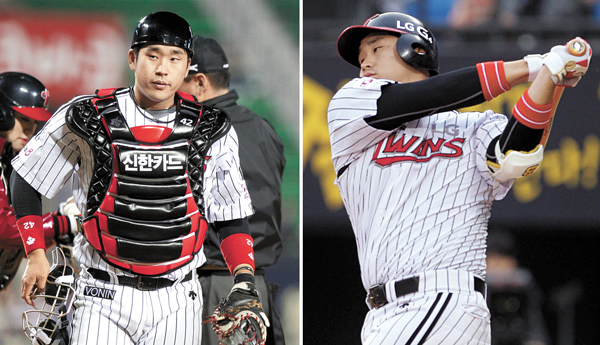 LG Twins’ Yoo Kang-nam is making his mark as a catcher and as a batter after coming out of relegation to the second division team of the Twins. [LG TWINS}

A month in the second division was apparently just what LG Twins’ Yoo Kang-nam needed, as the catcher has returned to the top team looking better than ever.

The 22-year-old catcher struggled early in the season. Although he was solid behind the plate, his offensive performance disappointed Twins manager Yang Sang-moon, who gave Yoo more opportunities to play than free-agent catcher Jung Sang-ho. The first eight games were essentially opportunities for Yoo to make good on Yang’s faith, but he couldn’t do it. By April 23, Yoo was relegated to the Futures League, the second division of the Korea Baseball Organization (KBO).

“Yoo seems to be thinking too much on the plate,” said Yang at the time. “I think he needs some time to train.”

He returned to his spot behind home plate on May 25 against the Lotte Giants and has played in every game since.

The Jamsil Derby game on May 29 against the Doosan Bears was especially memorable for Yoo, who rewrote his personal record in batting by going 4-for-5, collecting six runs-batted-in (RBI) and driving home one run. The Twins routed the defending champions 14-8, and Yoo’s go-ahead hit in the third inning made him the driver behind the team’s win. Yoo almost matched that performance Wednesday when he went 2-for-3 with one double.

Yoo was nonchalant about both his past relegation and successes over the last two weeks.

“I was given opportunities, but I couldn’t show anything,” Yoo said. “Poor showing on the plate led to poor showing in fielding as a catcher. As I grew more stressed out, I picked up bad momentum.”

“When I was relegated, I decided I would turn things around,” he added. Yoo said he got a lot of help from the coaches of the second-level team, who worked with him both on technique and regaining his mental focus.

Many players who get demoted often have something of a breakdown and have trouble regaining their feet. Adding to that, it’s rare for starting players like Yoo to be relegated unless they are injured. But Yoo decided he wasn’t going to let it affect him. With more time to practice at his disposal, he went to the batting cage whenever he could. He credits his return to the mental strength that he was able to regain while in the Futures League. “When I was there, I set my mind on how I was going to approach the game and my goals,” Yoo said. “I decided not to have any regrets.”

His fighting spirit was evident. Just last season, Yoo would shy away from compliments, giving the impression he lacked confidence. Things seem different now. “I try to speak and act thinking about how others might perceive me,” said Yoo. “I wanted to be seen as a steadfast and strong person.”

As a catcher, he wants to be the leader for the team. “I think I am getting more of a handle on how I should resolve the game and lead the pitchers,” said Yoo. “I am learning more about how to figure out what kind of batter we are going up against. I am going into the games these days bolder than before.”