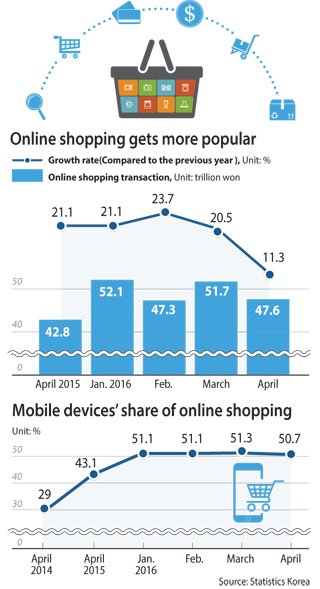 More Koreans are shopping online via smartphones and tablets than on their laptop or desktop computers.

According to Statistics Korea Thursday, online shopping transactions rose 11.3 percent in April compared to a year ago, hitting 4.76 trillion won ($4.0 billion). Mobile shopping via mobile devices surged 31 percent during the same period, and accounted for 50.7 percent of total online shopping, or 2.41 trillion won.

“Mobile payment services have been introduced to allow customers to purchase goods via mobile devices more easily than before, and retailers are improving their mobile apps to attract more customers,” said Sohn Eun-rak, a director at Statistics Korea. “Moreover, customers like to purchase goods via smartphone because retailers offer more promotions and discounts in their mobile apps.”

Mobile shoppers accounted for only 29 percent of all online shoppers in April 2014. The figure exceeded the 40 percent-level early last year and finally surpassed 50 percent in December.

By sector, people purchased more cosmetics online, while the figure for travel and reservation services fell.

People spent 32.5 percent more buying cosmetics in April compared to the previous year, while they spent 2.1 percent less for travel and reservation services.

“The number of Chinese tourists visiting Korea rose 12.1 percent year-on-year in April, and they were interested in buying cosmetics at both brick-and-mortar stores and online retail shops,” said Sohn. He added that reservation service dropped because fewer people went to the movies.

“In April 2015, there were more people visiting theatres due to hit movies such as ‘Avengers: Age of Ultron’ and ‘Furious 7,’” Sohn said. “Moviegoers in general fell by 2.72 million in April from a year ago, and I think this might have affected the reservation services sector.”

About 60 percent of online shoppers bought goods such as clothes, shoes, cosmetics and baby supplies via their mobile devices, according to the data.

Shoppers buying goods at online-only retailers rose 4.2 percent year-on-year in April, while it rose 23.3 percent for retailers that have both online and brick-and-mortar stores.