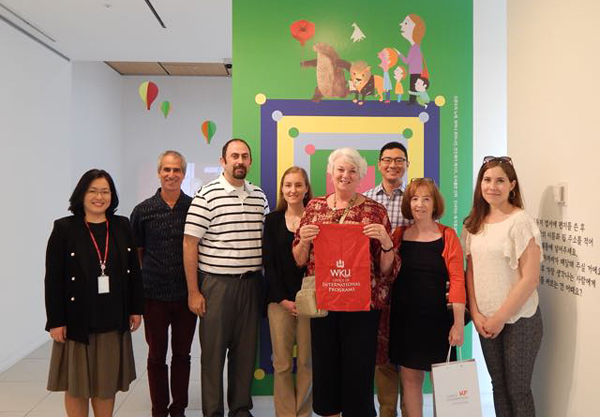 Faculty members from Western Kentucky University pose for a photo during their visit to the Korea Foundation during their two-week visit to the country under the International Year of Korea program. The WKU’s special visit program by eight professors ran from May 18 through today. [WESTERN KENTUCKY UNIVERSITY]

A group of eight professors from Western Kentucky University (WKU) visited Korea on a two-week program to have a glimpse into the Korean way of life and deepen ties with their South Korean counterparts under the International Year of Korea program.

Timothy Rich, assistant professor of political science at WKU, who made his fifth visit to Korea this time, said interest among students in Korea had dramatically increased over the past four years, which he attributed to the rising popularity of Korean pop culture known as Hallyu.

“I’ve been teaching East Asian politics for the last four years and when I started, it was almost exclusively for students who came in because they cared about China,” said Rich in a group interview with the Korea JoongAng Daily in a cafe in Seoul Wednesday.

“I have noticed just in those four years that has just shifted considerably toward Korea, and to a lesser extent Taiwan. I think a lot of it is because of pop culture and Korea’s role in economic developments.”

Each of the eight professors, whose major studies range from political science and communications to religious studies and education administration, came to Korea to incorporate their expertise with that of their Korean counterparts, stressing during the interview that they were not in the country merely for sightseeing or shopping but mainly to bring back with them knowledge of how their Korean academic counterparts do their studies, which they then plan to convey to their students in Kentucky.

The faculty’s visit to South Korea is part of a program in which the school designated Korea a “target” country for the 2016-17 academic year, during which the state university will seek to deepen its knowledge of the country and facilitate academic exchange programs with its partner schools: Yonsei, Hanyang and Konkuk universities.

On their two-week program here, each professor contacted Korean professors in their respective field and visited national attractions such as Insadong, Gyeongbok Palace and the border village of Panmunjom.

D’Lee Babb, assistant professor of early childhood education, said she was “surprised at how similar early childhood systems are between the United States and Korea,” in that the two share the “same teaching philosophy,” such as Montessori curricula.

One positive thing the United States can learn from Korea’s education system, she said, is the importance people here place on education and the respect shown toward teachers.

“One positive that our education system can definitely take away from Korea is the value of education; how important it is, and holding teachers in high regard,” she said, “We are lacking that in the states, to say the least.” Professor Helen Sterk, who heads WKU’s communication department, agreed, citing her own experience.

“I taught for a semester at Handong University in Pohang, and I was just amazed by how the students were so respectful to teachers. … There were very tangible markers of respect,” she said, recalling a time when she received flowers from her students on Teachers’ Day.

Korea is the third target country by WKU, which had designated Ecuador and South Africa for its first two international years. Andrea Cheney, assistant director of international programs in charge of the eight-member trip, said the program has chosen Bosnia and Cuba for the next two years.

Under the International Year of Korea, about 45 academic courses, focusing on Korea, are scheduled for the upcoming academic year, many of which will by taught by the eight professors on the trip.