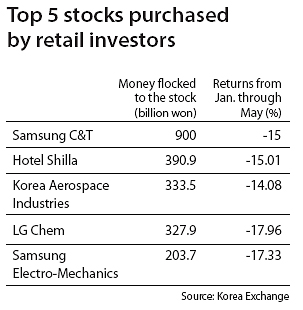 Retail investors turned out to be the biggest victims of the falling stock value of Samsung C&T after its merger with Cheil Industries while institutions and foreign investors came out on top.

The 10 most purchased equities in the benchmark Kospi from local retail investors recorded an average return of minus 12.83 percent in the first five months, according to the Korea Exchange on Friday, while the Korea Composite Stock Price Index posted 1.09 percent during the same period.

Market insiders say that the plummeting value of Samsung C&T was the main reason for the massive loss.

The value of Samsung C&T, individual investors’ favorite, fell nearly 18 percent to close at 114,000 won ($96) on Thursday compared to the closing price of 140,000 won on the last trading day of last year. The company recorded a monthly average return of minus 10.94 percent, and minus 38.71 percent for the yearly average, according to data from FnGuide.

Retail investors, usually referred to as “ant investors” in Korea, together bet nearly 900 billion won on Samsung C&T as the group has embarked on ownership structure adjustments. This was nearly 2.5 times as much as the individuals bet on buying the second-most-favored Hotel Shilla shares worth 390 billion won.

The accommodation arm of Samsung Group brought an average loss of 15.01 percent.

The 10 stocks most purchased by retail investors handed them losses during the same period.

Together, they invested about 333.5 billion won to Korea Aerospace Industries in the past five months but lost an average 14.08 percent in per-share value, and their 327 billion won investment in LG Chem brought them an average loss of 18 percent.

Analysts pointed out that the retail investors ended up losing money as they mainly invested in the C&T looking at the company’s position being at the top of the group’s ownership structure.

Kim Dong-yang, an analyst at NH Investment & Securities, explained that the absence of ownership or structural movements within Samsung Group was the key reason for C&T’s declining stock value. “Another factor was the company’s poor business performances in recent quarters,” Kim said.

While retail investors suffered, institutional investors reported an average return of 6.6 percent and foreigners’ 1 percent from their top 10 choice, by moving in the opposite direction of individual investors.