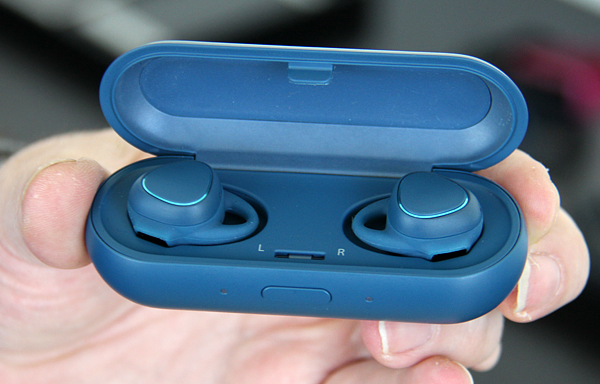 Samsung’s Gear IconX earbuds in a charging and storage case. They come with in-ear sensors for tracking heart rate, distance and pace. [AP/NEWSIS]

Just in time for summer, Samsung is unveiling a new fitness tracker that aims to undercut gadgets from market leader Fitbit.

Beyond offering all-day step counting and automatic sleep tracking, the $180 Gear Fit2 comes with GPS sensors for more accurate measuring of distance and pacing for runners and cyclists.

GPS is typically limited to higher-end devices, such as the Fitbit Surge and the Microsoft Band 2, both of which go for $250. The Fit2 is also cheaper than the new $200 Fitbit Blaze, which doesn’t have GPS.

The main drawback: The Fit2 won’t sync with iPhones, as Fitbits do. An Android phone - not necessary Samsung’s - is required for syncing music and workout data. 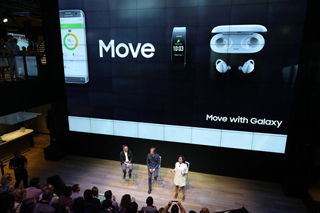 Samsung’s Gear IconX earbuds in a charging and storage case. They come with in-ear sensors for tracking heart rate, distance and pace. [AP/NEWSIS]

While Samsung is the world’s fifth-largest maker of wearable devices, according to technology market research firm IDC, most of those are Gear smartwatches, where fitness is an afterthought.

By contrast, fitness is front and center with the Fit2. Yet it will also have some smartwatch capabilities, including the ability to reply to messages from the device. Rival trackers at most tend to show you messages; replies are typically limited to smartwatches such as Apple Watch and Samsung’s Gear S2.

Advance orders on the Fit2 will begin Friday in the United States, with shipments a week later.

Later this year, Samsung will release its $200 Gear IconX earbuds that, in addition to playing music, will track exercise and heart rate. They’re designed as a stand-alone tracker, rather than a companion to the Fit2.

Under Armour’s upcoming heart-rate-tracking headphones are expected to cost $250. Samsung’s IconX goes further with built-in sensors to measure distance and pacing, though with less accuracy than GPS devices. There’s no screen, so you get audio readouts every mile or whatever interval you set.

With Thursday’s announcements, Samsung is trying to tap growing interest in health and fitness as sales of smartphones slow down.

In the first three months of this year, Fitbit shipped 4.8 million devices, or 25 percent more than a year earlier. That accounts about a quarter of all wearable devices worldwide.

Samsung, by contrast, shipped about 700,000, an increase of less than 5 percent, according to IDC. Samsung’s devices require an Android phone, while Fitbits work with iPhones and Windows phones as well.

Samsung is taking a cue from Fitbit in creating leaderboards and challenges for family and friends to motivate each other. This has been one of Fitbit’s strongest areas, and Fitbit has an advantage as the market leader: Someone you’re trying to challenge - or taunt - will more likely have a Fitbit than another device.

Samsung’s version works through its S Health phone app, meaning Android phone users will be able to participate without a dedicated tracker. But it could be tougher to motivate someone who hasn’t made a commitment to fitness by buying a tracker.

Both the Fit2 and the IconX will let you leave your phone at home. You can download hundreds of songs for phone-free workouts, but you can’t tap Spotify and other online services without the phone. The phone needs to run at least KitKat, the 2013 version of Android. For the IconX, music syncing might not work with non-Samsung phones. A PC would be needed in such cases.

These devices represent Samsung’s second effort at fitness tracking, not counting all its smartwatches with fitness capabilities. The original Gear Fit in 2014 had a beautiful, curved screen, but lacked many power features. The Fit2 addresses that with GPS and a wider, customizable screen to fit in more data on your workout.

But like most trackers, the Fit2 lacks many stopwatch controls found on sports-specific devices such as Garmin Forerunners for running. AP