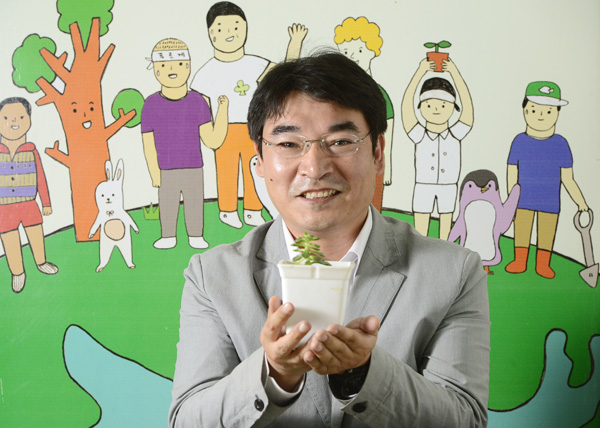 A Protestant minister from Gangwon Province gave up his calling, one of the most stable occupations in Korea, for an entirely different vocation: planting trees in the deserts of Mongolia.

Kim Jong-woo, 45, is director of the international cooperation department at Green Asia, a nongovernmental environmental preservation organization. The organization mainly plants trees in Mongolian deserts, with a side mission of planting fruit trees to help Mongolians become self-sustainable.

“Carbon dioxide emissions from developed countries have been accumulating in the atmosphere of Mongolia, which is an inland basin, and the country’s average temperature rose about 2.1 degrees Celsius over the last 60 years,” Kim said.

One-third of Mongolia’s water resources have disappeared, as 887 rivers and 1,166 lakes have dried up over the last 30 years. Up to 10 percent of the country’s population became environmental refugees after they lost their homes due to rapid desertification.

Before Kim went into environmental preservation in 2010, he was a minister at a small church in a village in Gangwon province. He followed in the footsteps of his father, who was the pastor of a big church in Busan, and studied at a theological college.

But he knew something was wrong.

“It was like wearing clothes that didn’t fit my body,” Kim said. “It was a stable life, but I didn’t feel happy.”

According to Kim, he went to theology college mainly because his parents wanted him to.

“I wanted to become a human rights lawyer when I was young,” Kim said. “A lawyer for justice who helps underprivileged people in times of difficulties.”

Kim said he once ran away from home after a dispute with his parents over his career. But his parents were adamant. Although Kim intended to be in theological college for just a year, he continued his studies and fell into the clerical life.

Kim promised himself to become a “pastor who will stand on the side of the poor.” Thus, when he was senior enough to become a pastor, he deliberately went to a small village in Gangwon.

“Pastors lead their devotees to redemption through words,” Kim said. “But the world doesn’t change with mere words. I felt that it was actions that really mattered.

I wanted to take actions necessary to change the world even in minor ways.”

Kim was introduced to Green Asia while he was struggling with his vocation.

“Climate change will threaten the lives of the human race in the next 20 to 30 years,” Kim said. “Although we can’t feel it immediately, if we don’t take action now, we won’t be able to survive on earth.”

Kim’s job in the organization is to publicize its purpose and attract volunteers and other kinds of support. For the last six years, he worked with multinational conglomerates, including Samsung Group, as well as with Korea’s so-called megachurches, expanding the scope of the organization’s activities.

Kim’s strategy was different from that of typical charities. Instead of exhorting people to donate, he found mutual goals that could benefit both the organization and its partners.

“The job was very similar to preaching,” Kim said. “I explained to the people why they should participate and how the project could benefit their businesses.”

Kim suggested they teach agriculture and forestry in Mongolia.

“It’s a win-win situation,” he said, “since the corporation earned a chance to teach, and Green Asia built an educational infrastructure in which local people in Mongolia learn about agriculture and forestry.”