Korean is ‘goddess of the longboard’

Korean is ‘goddess of the longboard’ 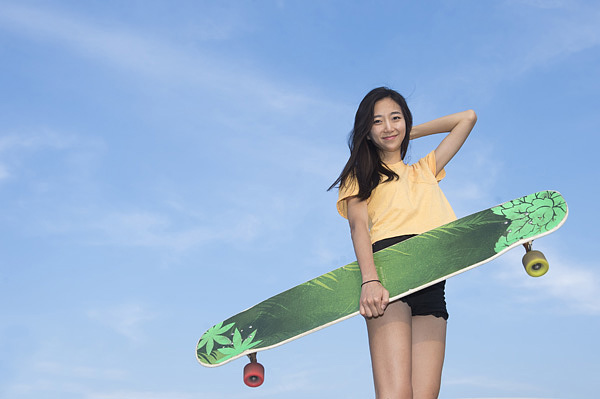 A woman in her 20s rides a skateboard, long locks flying. She looks as if she’s dancing a waltz. She pirouettes on the board fearlessly. With a flip of her foot, she can make the board spin 180 degrees.

A minute-long video featuring Ko Hyo-joo, nicknamed the “longboard goddess” by fans, has been viewed around the world on social media. One video of her has more than 26 million views. On Facebook alone, the clip has been shared 225,000 times.

“She is so graceful,” wrote one of her foreign fans online.

The 28-year-old Ko is an average Korean salarywoman. She works as a user interface designer at LINE, the messenger unit of internet portal Naver.

“I never knew my hobby could attract this much attention,” she said.

Lo’s skateboard is longer than normal, at around 110 centimeters (43 inches). Skateboarders call it a longboard. The longboard was used as a tool for dancing or acrobatic movements, and has now developed into an extreme sport.

Ko goes boarding every weekend in parks along the Han River in Seoul. She majored in fine arts and visual design in college.

Her interest in skateboarding began in 2014, her third year in her current job.

“I was exhausted and swamped by work,” Ko said. “I happened to watch a video clip of Ana Maria Suzano, a Brazilian longboarder. At that very moment, I felt, ‘This is it!’”

She bought a longboard and headed to the river park nearest her house.

“Because I was not good at physical activities, I spent about a year acquiring techniques that others can learn in three months,” she said modestly. “I thank my crew members who helped me correct my posture.”

Ko traveled through Europe with her longboard in February to the Netherlands, Germany, France and Spain.

For the first time, she participated in SYCLD, the biggest longboard competition in the Netherlands. Ko made it to final round of the tournament.

“Despite the short history of longboarding in this country, Koreans are highly competitive,” Ko said.

As she acquired fame, there were calls from China, Hong Kong and Taiwan for games and camera commercials.

Ko insists she has learned how to enjoy what she does.

“I was quite stressed about three months after starting to learn the sport,” she said. “For example, I really wanted to master the ‘shove it’ technique, and I kept repeating it. I fell down and got up hundreds of times. I even cried thinking, ‘Why can’t I do this?’

Then, I started thinking why I started boarding. The reason was to just enjoy it. That’s how I do it now.”