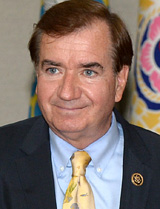 Rep. Ed Royce, chairman of the U.S. House Committee on Foreign Affairs, reminded Seoul that it is Congress that must pass any legislation related to Korea, regardless of who is elected the next American president - and that Congress has the country’s back.

“It is Congress that passes the laws,” Royce said as he sat for an interview with the Korea JoongAng Daily at the U.S. Embassy in central Seoul on Friday. “Republicans and Democrats in a bipartisan way feel that this is a very important alliance.”

Koreans have increasing concerns over controversial remarks made by Donald Trump, who cinched the Republican presidential nomination last week, about keeping U.S. troops here, the maintenance of the military alliance between Seoul and Washington, and other regional security issues.

Royce described the alliance between Seoul and Washington as being the strongest it has ever been. He also elaborated on additional sanctions implemented by the United States to curb Pyongyang’s nuclear and missile provocations, which he predicted will have “a great impact.”

On Wednesday, the U.S. Treasury Department designated North Korea as a “primary money laundering concern,” which was based on the North Korea Sanctions and Policy Enhancement Act, authored by Royce and passed by Congress in February.

Royce, a Republican who represents California’s 39th Congressional District, which includes parts of Orange County and Los Angeles, has been a longtime supporter of various Korea-related issues.

The congressman was co-sponsor of the unprecedented House Resolution 121 of 2007, which called for an official apology from the Japanese government for its sexual enslavement of women during World War II.

During this visit to Seoul, Royce headed a delegation of U.S. congressmen including Rep. Bill Flores of Texas and Rep. Ted Lieu of California, who met with Korean Defense Minister Han Min-koo and Vice Foreign Minister Lim Sung-nam on Thursday mainly to talk about North Korea issues.

Q. South Koreans have some trepidation over what a Donald Trump presidency may mean for the U.S. alliance with Seoul, such as Washington maintaining U.S. troops on the peninsula and continuing to extend its nuclear umbrella to the region. Should we be concerned?

Republicans and Democrats in a bipartisan way feel that this is a very important alliance for our members in Congress. For our House members and Senate members, this is a strongly held position. And it is Congress that passes the laws. Every spending bill originates in the House of the Representatives. I’m chairman of the House Foreign Affairs Committee; we have 44 members, and we have set these policies. I’ve been traveling here for over 20 years, and for 10 of those years, I was chairman of the inter-parliamentary exchange working with the [Korean] National Assembly. I would say I’ve never seen the relationship as strong as it is today… and I think it’s going to get stronger.

The U.S. Treasury Department designated North Korea a “primary money laundering concern.” Is this measure a significant step up from the Banco Delta Asia sanctions in 2005, when Washington blacklisted the Macao-based bank for its role in laundering money for North Korea?

Was this discussed with South Korean officials during your visit?

We are here to see what we can do to proactively put pressure on North Korea to reconsider the types of destabilizing acts that they continue to commit. … Those sanctions are based upon what we learned when the Banco Delta Asia sanctions were originally deployed. What we found at that time was that it curtailed the ability of the regime - the dictator - to pay his generals and to obtain the weaponry on the black market that he needed for his missile production operations. It shut that down at the time.

Those sanctions were subsequently lifted by the State Department, but through a process of talking with those who had defected from North Korea, we have found just how effective the program was. We have now redeployed or reimposed those sanctions, and … this will have a great impact.

If North Korea does not heed international warnings and continues its nuclear and missile provocations, what can we expect from Washington as the next measure?

Now the [North Korea sanctions] bill has been fully deployed, the question goes to enforcement. But there are also actions that are being taken because there other sources of funds that the North Korean regime obtains, other sources of hard currency. One of those is weapons sales, for example, to Uganda. You saw President Park Geun-hye just met with the government there and convinced it to discontinue any further transactions. We are going to deploy the same strategy with Namibia and with Egypt and with a few other countries that are still buying weapons systems from North Korea.

How do you assess the Korea-Japan agreement on Dec. 28 to resolve the “comfort women” issue?

The issue is to see the full implementation of this agreement. I think the United States has an important role to play in making certain that it is fully implemented. Long-term, what I really wish to see is a teaching in the history books in Japan that is the equivalent of the teaching that you see in the history books in Germany - a recognition that the victims of World War II paid a very heavy price, and a full comprehension of what the occupation and the war meant..

Some 90 days has passed since the adoption of UN Security Council Resolution 2270 implementing sanctions on Pyongyang. Do you think China has done its part in its implementation?

I do know that China … has curtailed to some extent the purchases of coal from North Korea. So we’ve seen partial participation in putting additional pressure on Kim Jong-un from China.