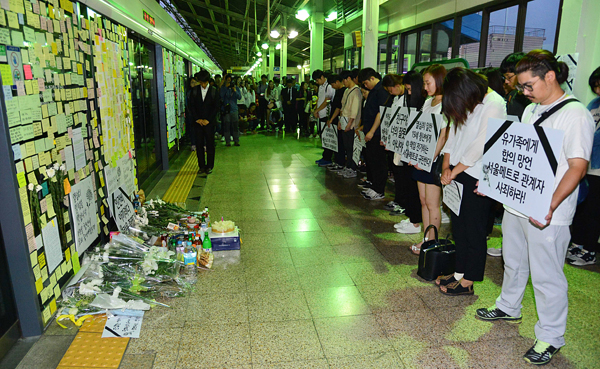 Citizens are mourning on Thursday the death of the 19-year-old mechanic who was hit and killed by a train while repairing a platform door in Guui Station last week. The crowd gathered in front of a temporary mourning site in Guui Station in Gwangjin District, eastern Seoul. [NEWSIS]

Seoul Metro, which has been outsourcing maintenance work to reduce costs, pressured subcontractors to hire its own retirees at triple the salary of regular mechanics.

And many were hired to do mechanical work for which they had no training.

The influx of untrained Seoul Metro retirees over the age of 60 resulted in the real mechanics being forced to work alone, as was a teenaged maintenance worker who was killed by an arriving train at Guui Station on May 28.

Internal records of Eunsung PSD, the subcontractor who employed the 19-year-old accident victim, showed that Seoul Metro has been pressuring such subcontractors to hire its retirees.

In a contract signed between Eunsung PSD and Seoul Metro in May 2015, Seoul Metro specifically requested the subcontractor to hire 38 former Seoul Metro officials in order to close the deal. This meant that 30.4 percent of Eunsung PSD’s 125 mechanic positions had to be filled by former officials of Seoul Metro.

Additionally, the contract requested that the 38 former officials of Seoul Metro should be exempted from mechanical skill assessments in their employment. Therefore, out of 125 platform-door mechanics, only 87 workers were confirmed capable of doing repair work on subway platforms. As a result, their schedules were often jam-packed.

“We could not send mechanics to conduct repair work in pairs when there was an influx of error reports,” a Eunsung PSD official said.

The contract between Seoul Metro and Eunsung PSD also outlined the salary requirements for the 38 former Seoul Metro officials: 4.02 million won ($3,387) per month, with a lump sum retirement bonus of 4.42 million won per employee.

The teenage mechanic killed last week, who received training while working for the company in high school, was reportedly paid 1.44 million won per month.

“The situation today is no different to and perhaps worse than the social hierarchy of the Joseon Dynasty,” said the Saenuri Party’s floor leader Chung Jin-suk. “How is it possible that a 19-year-old young man receives 1.44 million won while a Seoul Metro retiree rakes in some 4 million won per month?”

The history of so-called revolving door appointments - the finding of cushy jobs for people retiring from government corporations - between Seoul Metro and the subcontractor does not end there.

Eunsung PSD was established in 2011 as the result of an agreement between the management and labor at Seoul Metro to help secure post-retirement jobs for its workers. The CEO of Eunsung PSD, Lee Jae-bum, and major shareholders of the company are all former officials of Seoul Metro, a public corporation run by the city government.

As working alone on a platform door violates Seoul Metro’s safety manual, Eunsung PSD is suspected to have doctored its reports to falsely report that two mechanics worked on jobs when only one did.

Chung Soo-young, head of the Safety Management Headquarters of Seoul Metro and acting president of the company, admitted seeing evidence of manipulation of records when asked about it in a Seoul Metropolitan Council meeting on Friday.

“But Seoul Metro has never ordered [Eunsung PSD to doctor the records],” he said.

Seoul Metropolitan Council Rep. Choi Pan-sul reported at the meeting that 90 Seoul Metro retirees were hired at Eunsung PSD in 2011 when the company was established. Currently, there are reportedly 36 former Seoul Metro officials at the company, some 20 of whom are over 60.

A Seoul Metro official said that the retired officials from Seoul Metro who have been rehired at Eunsung PSD “bring a plethora of knowledge on platform doors with their 20-plus years of experience.”

Out of a total number of 566 employees of the five companies including Eunsung PSD, 143 employees, or 25.3 percent, are former officials of Seoul Metro.

“We can’t fire them because of the contract signed with Seoul Metro,” said an official at Eunsung PSD.

The Financial Trade Commission is currently investigating whether Seoul Metro violated Article 23 of the Monopoly Regulation and Fair Trade Act, which stipulates that no enterprise shall trade “under the terms and conditions which unfairly restrict business activities of a transacting party or disrupting business activities of another enterpriser.”