Singer who sold painter’s art as his own is summoned

Singer who sold painter’s art as his own is summoned 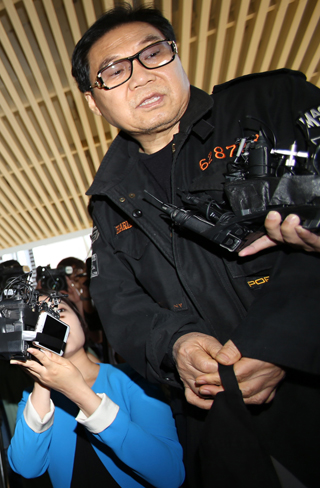 Cho Young-nam, 71, surrounded by reporters, appears at the Sokcho branch of the Chuncheon District Prosecutors’ Office in Gangwon for questioning on Friday. The singer and self-proclaimed artist is accused of fraudulently selling works he outsourced to a ghost painter. [NEWSIS]

Singer Cho Young-nam, 71, who has been accused of selling paintings he did not create and signing his name to them, was summoned to the Sokcho branch of the Chuncheon District Prosecutors’ Office in Gangwon Province on Friday for questioning.

A group of fans gathered in front of the building in a show of support for the one-time Korean superstar of the 1970s and ’80s.

Moments before disappearing behind the doors, Cho gave a short apology, saying, “I am a singer, not a professional painter. But I am sorry that somehow, I have caused a scandal.”

Suspicion was cast upon Cho when a disgruntled ghost painter, Song Ki-chang, came clean that he has so far painted about 200 pieces since 2010 on behalf of the singer.

Song says that he was only given 10 percent of the proceeds, but his claims still remain to be confirmed. Prosecutors have found that as many as 30 works painted by Song have been sold, estimated at more than 100 million won ($84,000).

If buyers are shown to have been uninformed of Cho’s dealings, he may be charged with fraud under criminal law.

The questioning was scheduled to end around 11 p.m. Friday, focusing on Cho’s motive in the sales and whether there are other ghost painters aside from Song.