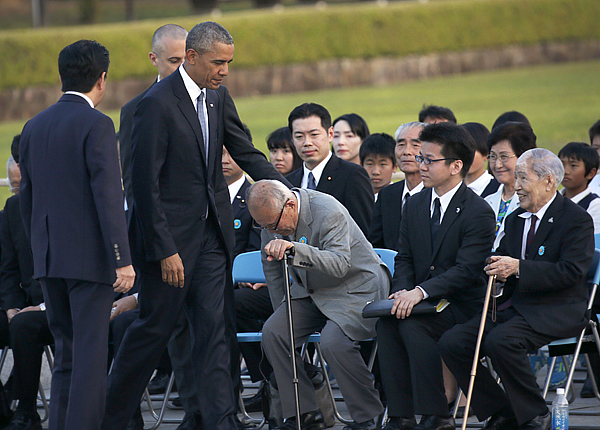 President Obama’s decision to visit Hiroshima sparked a substantial debate in the United States: Would he issue some kind of apology?

Would the event focus attention on the American bombing rather than Japanese war guilt?

These concerns vastly underestimated the president, but sadly proved partly right for the prime minister.

The president didn’t start his day at the war memorial but by affirming the importance of the alliance in a speech to American and Japanese servicemen and women. An interesting feature of this earlier speech was its focus not only on the military function of alliances but on the humanitarian mission of the two militaries during recent natural disasters in the region.

The key feature of the president’s speech at the Hiroshima memorial was that he avoided a reflection on the Pacific War per se. Rather he put Hiroshima and Nagasaki in the context of the wider global conflict. The president reflected on the duality of humans as both the most creative and destructive of species, emphasizing all of the victims of the conflict and not just those of the bombing. He sought to use the occasion of this reflection to talk about the moral imperative of limiting the risks of such conflicts, including through diplomacy.

Subtleties mattered. Coming to a site fraught with a victims’ narrative, Obama did not bow after laying the wreath and made no apology for the American bombing. He deftly swept aside the Japanese monopoly on suffering by noting that thousands of Koreans and even a dozen Americans were also killed in the Hiroshima bombing.

His emphasis throughout was not on perpetrators and victims, but on the innocent. And it was clear — although not explicit — that the innocent were hardly limited to the victims of the two atomic bombings. Indeed, the vast majority of the innocents that died in the Pacific War were Chinese, Koreans and other Asians who fell under Japan’s imperial net.

The theme of a world without nuclear weapons was introduced, but lightly. The president acknowledged the role that alliances played in the security of the region, and by extension the role that extended nuclear deterrence continued to play as well. He also stated clearly that nuclear zero — the abolition of nuclear weapons — was unlikely in his lifetime.

But if he did not emphasize forgiveness exactly, he underlined the fact that “we can learn, we can change.” Few relationships embody this hope than the alliances the U.S. has forged with Japan and German. The weight of history is heavy. But can anyone seriously believe that Japan could once again embark on a course of unrestrained militarism? If we are honest, such a path is unthinkable.

That said, Prime Minister Abe’s remarks exhibited much less finesse and subtlety than the president’s. The prime minister did reference his 70th anniversary speech, his reflection on the “harsh history” and extended condolences to the American youth lost in the conflict.

But his discussion of Hiroshima patronized the president by noting it allowed him to witness the effects of the bombing first hand. Do Americans — finally mobilized to fight by Pearl Harbor and losing more than 100,000 soliders in the Pacific Campaign — need reminding of the costs of the war?

From then on, it was precisely the focus on Hiroshima and Nagasaki that so diminished the prime minister’s comments. In Prime Minister Abe’s telling, it was the bombing, not the war to which it ultimately put an end, that was “the tragedy that must not be repeated again.”
Yet despite these miscues, both Obama and Abe’s restatement of the multiple virtues of the alliance, including its security function, make the deep point that the president wanted to convey: that historical learning is possible and that even countries responsible for untold violence and destruction can be remade. It serves no one’s interest — not China’s, not Japan’s and not Korea’s — to compete for the status of greatest victim. What possible purpose is served? The way to honor the innocent is not to refight the last war, but build bulwarks against future ones.