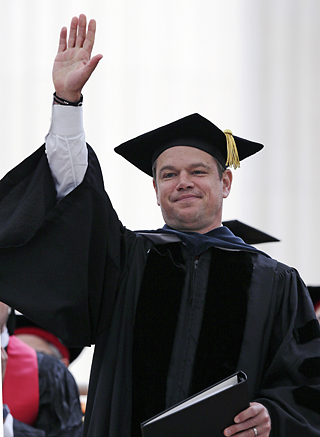 CAMBRIDGE, Massachusetts - Matt Damon spoke to Massachusetts Institute of Technology graduates Friday and passed on advice he got from former President Bill Clinton.

The actor, who grew up near the MIT campus and played a mathematically gifted MIT janitor in “Good Will Hunting,’’ listed what he described as some of the world’s greatest problems, including income inequality, a corrupt banking system and a broken political system. Then he told graduates: “Turn toward the problems you see. You have to engage.’’

More than 1,000 undergraduates and almost 1,800 graduate students received their degrees at Friday’s ceremony.

Damon, who dropped out of Harvard to pursue his acting career, said being keynote speaker was an honor he didn’t deserve. He questioned why he was selected when previous commencement speakers have included Nobel prize winners and presidents.

“And who did you get? The guy who did the voice for a cartoon horse,’’ referring to the 2002 animated movie “Stallion of the Cimarron.’’

He even let his politics shine through, taking a swipe at presumptive Republican presidential nominee Donald Trump while discussing simulation theory - the notion that the world is part of an advanced alien species computer simulation. “If there are multiple simulations, how come we have to be in the one where Donald Trump becomes the Republican nominee for president? Can we transfer to a different one?’’ he asked.

The actor and filmmaker best known for his roles as Jason Bourne also borrowed a line from his latest movie, “The Martian,’’ to caution graduates: “Not every problem has a high-tech solution. We can’t science the you-know-what out of every problem.’’