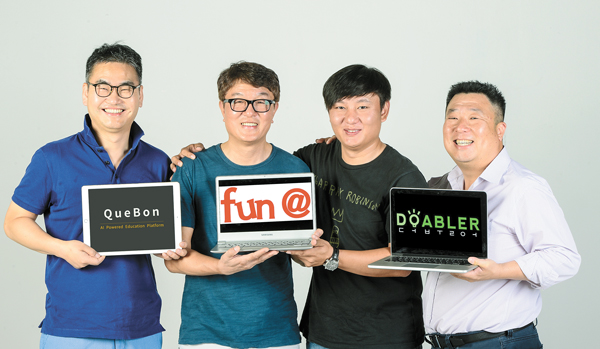 Middle-aged entrepreneurs are abandoning high salaries and executive-level positions to join their young Korean counterparts in the expanding start-up space.

Lee Jun-hee, 52, founder of online shopping mall Auction, is working with Jin Oh-min, 46, CEO of social networking service Fun@, to launch an application dubbed Town Talk in the second half of the year.

The app will be a social networking service that will connect merchants and residents within neighborhoods, where retailers can share information about special offers for customers and facilitate communication among neighbors. Self-verification of residence will be required.

“Although social networking has developed greatly, I found it unfortunate that mutual relations in reality are apparently disappearing,” said Jin. “This app will supplement negative aspects of the current online-to-offline services by offering merchants a free space for marketing and promotion.”

Lee added that a number of app users would help develop various business models for commerce.

“We supplement each other,” Lee said. “Young colleagues propose creative ideas, while we execute them in a realistic manner. We are covering each other’s weakness.”

Kim Ki-seok, a 47-year-old CEO of Doabler Platform, a crowdfunding company, had a 20-year career in the financial industry. Kim served as chief of the Bank of America Merrill Lynch office in Seoul. His company focuses on educating students from middle schools to universities on the concept of crowdfunding. Kim recently signed an agreement with Yonsei University to help boost start-up creation on the campus.

“The Korean traditional culture of sending money for family events and savings among friends can be the origin of crowdfunding,” Kim said. “I want to develop a Korean style of crowdfunding that adheres to Korean customs.”

In August, Kim’s company is scheduled to launch an app in partnership with Nonghyup, which will have not only a social network function but also money transfer capabilities.

“After finishing my term at the financial institution, I was offered another position at a bank, but I didn’t want to live counting toward a retirement date, so I refused to take it,” Kim said. “Having experiences of making important decisions at previous workplaces helped me set up my own company.
“I earn less than before, but I am excited about my future,” Kim said.

Cho Bong-han, 51, former vice president of Samsung Fire & Marine Insurance, developed QueBon, a math-education platform, and is teaching students with the tool himself. The platform is based on artificial intelligence (AI). He plans to register his business as a company this month.

“Korean students have outstanding talent in math, but this country does not have world-shaking mathematicians,” Cho said. “My goal is to introduce teaching methods that do not require students to memorize formulas.”

The platform for QueBon, which is French for “What would be better?” teaches students math by having them draw and paint images.

Cho also plans to launch online lectures by the end of this year, and open an offline learning center where students can gather to learn via a 200-inch screen. His AI platform will capture students’ learning abilities and give assignments that are challenging enough considering their capabilities.

“In opening start-ups, age doesn’t matter,” he said. “We might lack passion or braveness compared to the younger generation, but we can do it based on strong financial power, wide experiences and human networking.”