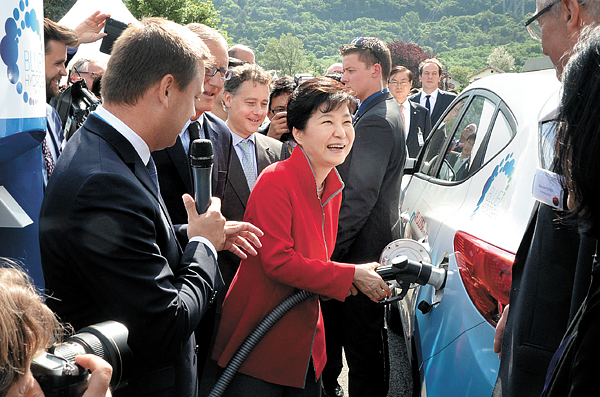 President Park Geun-hye is charging up a fuel cell electric vehicle taxi at the headquarters of Air Liquide in Grenoble, France, on Saturday. [NEWSIS]

Korea’s No. 1 automaker inked a memorandum of understanding with Air Liquide, to strengthen cooperation between the two companies and establish global leadership in the fuel-cell electric vehicle (FCEV) market.

During the ceremony, Hyundai demonstrated the current electricity and dust reduction technologies of its Tucson FCEV vehicle and its FCEV taxi, which is currently running in Paris.

Under the agreement, Hyundai Motor and Air Liquide are attempting to invigorate the fuel-cell electric vehicle market, increase utilization of hydrogen as a clean renewable energy and develop business models related to hydrogen refueling stations.

The French company purchased two Hyundai Tucson FCEV vehicles in 2013 and installed Korea’s first hydrogen refueling station that meets international standards at the Hyundai Motor Group’s Environmental Technology Laboratory this year. Hyundai plans to complete the installation of a hydrogen refueling station at its European headquarters in Germany in the second half of this year.

“We expect significant synergy from the partnership with Air Liquide, which boasts global competitiveness in the hydrogen energy industry while we have top-notch technology shown in the world’s first commercial production of fuel cell electric vehicles,’’ said a Hyundai executive. “We will continue to contribute to the wider use of fuel-cell electric vehicles globally.’’

The automaker believes fuel-cell vehicles are the future of eco-friendly vehicles, surpassing hybrids and electric vehicles as they are 100 percent pollution free, emitting only water without any emissions such as greenhouse gas.

Unlike conventional vehicles which run on diesel or gas, the cars combine hydrogen and oxygen to produce electricity to power the engine. The electricity generated from the fuel cell electric vehicles can also be used as a power source in everyday life such as in camping and in times of power outages, the company said.

While the outlook for the fuel-cell electric vehicles is mixed, there is growing expectation that the vehicles’ utilization will likely increase significantly after 2025 from the sales level of about 600 units in 2015.

Currently, most countries including the United States, Japan, China and those in Europe are focusing on hydrogen as a next-generation energy source and are aiming to promote sales of hydrogen electric vehicles and charging infrastructure to create a “hydrogen society.”