Moonlight palace tour a must for any Seoul visitor

Moonlight palace tour a must for any Seoul visitor 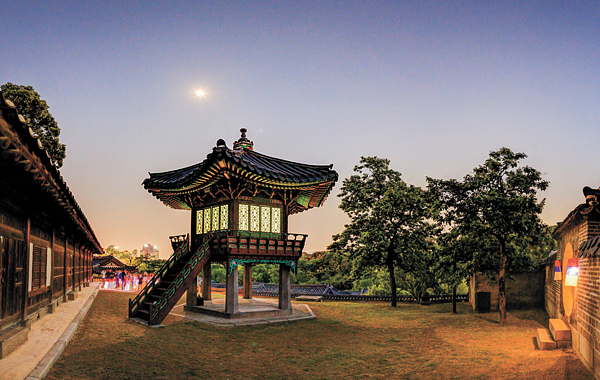 “This was the best thing I have done in my three months in Korea!” exclaimed a girl in her 20s as we made our way back to the main entrance of Changdeok Palace.

Designated a Unesco World Heritage Site, Changdeok Palace is a popular spot for enjoying a moonlight stroll with friends and family. The nighttime tour, which costs 30,000 won ($24) per person, has been held every spring and fall since 2010. Tours are available in English, Japanese and Chinese.

While the visitors waited, the lone guard standing in front of the closed gates suddenly blew his horn, and one of the large wooden doors began to open. Six more guards dressed in colorful attire stepped through the door and performed for the waiting crowd. After they finished, they positioned themselves in front of the gate to let curious spectators take pictures.

I was placed in the first group, and right before we entered the palace, it started to drizzle. But the organizers were well-prepared and quickly handed out raincoats. Fortunately, the rain did not last long. We also received traditional lanterns to carry to help light the way. But that night the clouds reflected the city lights, so it was brighter than usual, the tour guide told us.

The tour lasted two hours total but hardly felt that long at all. The walking was not too much, there was a restroom soon after we entered the secret garden, and we stopped just long enough at each spot to take pictures and enjoy the unusual nighttime calm in the otherwise bustling city. Although the moonlight tour price is much higher than a normal daytime visit, it is well worth it.

The last tours this spring will run June 21 and 22, and they will start up again from August to October. For more information, visit www.cha.go.kr.