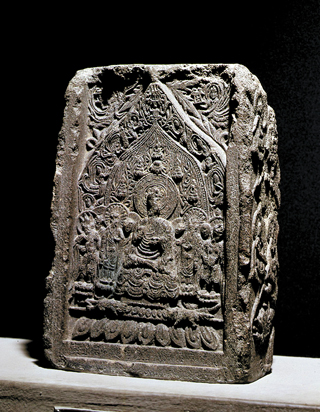 Name: Stele of Amitabha with Inscription of “Gyeyu Year,” Offered by Jeon


This Buddhist monumental stele discovered at Biamsa Temple in Yeongi County, South Chungcheong, features a stone structure in the shape of a rectangular cuboid elaborately carved with Buddhist images and inscriptions on all four sides.

The front face has a carved rectangular border containing an Amitabha Triad where the principal Buddha seated on a square pedestal features an oval face and robust build in a stable, comfortable sitting posture.

The hands, displaying a gesture symbolizing Buddha giving a sermon, are comparatively large, showing an influence from the tradition of the Three Kingdoms Period (57 B.C. to A.D. 668).

On each side of the pedestal are two lions. The two attending bodhisattvas flanking the Buddha are standing on lotus pedestals on the lions’ backs. Their faces are heavily damaged but have mandorlas decorated with lotus designs.

Experts believe that the monument was set up in 673 after Silla won a series of wars which led to the unification of the three early Korean kingdoms.