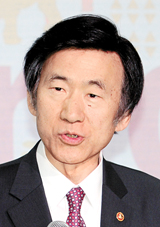 Cuba is one of four countries Seoul has yet to normalize ties with; the three others are Syria, Kosovo and Macedonia.

Havana is known to be a close ally of Pyongyang, a key reason why local pundits claim establishing ties will not be easy. The well-grounded relationship between the two communist regimes hit a high in the 1980s, when North Korea supplied Cuba with 100,000 AK-47 rifles after the Soviet Union declared it could no longer provide military aid against a feared U.S. invasion.

While very little information was known as of press time Sunday regarding precisely who Yun was planning to meet during his visit, the Foreign Affairs Ministry said the primary purpose of his visit was to attend the 7th Summit of the Association of Caribbean States (ACS), which South Korea has joined as an observer country since 1998. Mostly composed of countries bordering the Caribbean Sea, the ACS aims to enhance cooperation within the region. The ministry further noted that Yun’s participation was in line with President Park’s visit to four South American countries last year.

In a press conference on Saturday in Seoul, just hours before his departure, Yun highlighted that his visit was part of Seoul’s effort to strengthen diplomatic relations in Central-South America. Through that reinforcement, the South Korean government expects to open new diplomatic prospects abroad, the top diplomat said, adding that President Park’s recent visit to Africa will hopefully bring about the same outcome.

As to Seoul’s stance on establishing ties with Havana, Yun, without further elaboration, said the South Korean government has made “various, quiet” efforts to build stronger relations with the Caribbean state, and that his own visit would likely be “another crucial milestone” in that regard.

“If South Korea and Cuba strive to make an effort,” he said, “I believe both sides can reach the favorable results that both desire.”

According to the Foreign Affairs Ministry, Yun will meet privately with the general secretary of the ACS and negotiate with other countries concerning how Korea can contribute to the sustainable development of countries bordering the Caribbean Sea, many of which are now struggling with rising sea levels.

A source from the ministry said under the condition of anonymity that South Korea is capable of contributing to the world’s environmental tasks on far more aspects, especially given the fact that it hosts the Green Climate Fund headquarters and chairs the UN’s Economic and Social Council.

This year’s ACS summit ran for three days with foreign ministers and government representatives of nearly 35 countries in attendance.