Park wraps up trip to France with anniversary celebration

Park wraps up trip to France with anniversary celebration 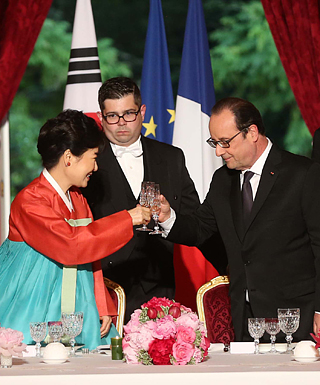 President Park Geun-hye returned to Seoul on Sunday from Paris after a state visit there to commemorate the 130th anniversary of Korea-France diplomatic relations.

Park met with French President Francois Hollande and adopted a joint declaration on the 130th anniversary of Korea-France diplomatic relations in the Elysee Palace in Paris on Friday.

In the declaration, Park called France the “best partner for the cultural enrichment and creative economy” and added that “the two countries will cooperate to develop a shared peace and prosperity.” At the subsequent press conference, Park voiced her wish for both countries to be “friends who listen to each other’s interests and come up with solutions for problems that lie ahead.”

To Park’s request of support for UN sanctions against North Korea, Hollande responded with a promise to fully implement the UN sanctions to force North Korea to abandon its longtime nuclear ambitions.

“Korea can expect the complete support of France,” Hollande said.

“France’s tenure as president within the UN Security Council started on June 1,” a Blue House official said. “It will be of great help in increasing the pressure on Pyongyang.”

The UN sanctions currently imposed on North Korea are the toughest of their kind, imposed after North Korea’s fourth nuclear test and ballistic missile tests earlier this year.

On her trip to Ethiopia, Uganda and Kenya before arriving in Paris, Park also secured these African countries’ support in isolating North Korea for its continued nuclear development. She also promoted her administration’s new development project, “Korea Aid,” while in Africa.

Park’s efforts even motivated Pyongyang’s longtime ally, Uganda, to jump on the bandwagon by cutting off all security, military and police cooperation with the North. Uganda has been an ally of Pyongyang since 1963.

Park, in the meeting with Hollande, also expressed a desire to join the Paris Club, an informal group of officials from creditor countries. South Korea has been acknowledged as one of the leading creditor countries since the foreign exchange crisis 19 years ago.

Leaders of the two countries were debriefed on the results of the Korea-France Leaders Forum. The presidential spokesman, Jeong Yeon-guk, said, “To mark their 130 years of bilateral ties, the Korea-France Club, comprising many renowned scholars and business leaders from both countries, have discussed 21st-century challenges and cooperation in foreign affairs at the forum held in Seoul on March.”

Hong Seok-hyun, president of the club and chairman of the JoongAng Ilbo and JTBC, said, “We had discussions straddling sectors of politics, economics, culture, education and science. If the propositions written in this report stand and are implemented at the government level, the friendship of the two countries will improve by a great deal.”

Park wrapped up her grand tour with a visit to the electric and hydrogen-powered vehicle laboratory in Grenoble, southeastern France on Saturday local time, where Park herself was once a student at the University of Grenoble.