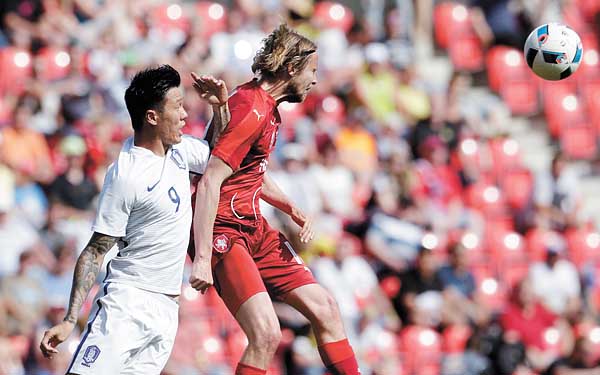 When the Korean national football team last faced the Czech Republic in 2001, the team experienced a devastating 5-0 loss. More than a decade later, Korea finally got revenge on Sunday when it defeated the Central European team 2-1 in an international friendly in Prague.

While the team performed solidly overall, it wasn’t stars like Son Heung-min or Ki Sung-yueng that played the key role in Korea’ victory. In fact, it was Yoon Bit-garam, who has been overshadowed by Son and Ki in the midfield, who contributed most with one goal and one assist.

After being routed 6-1 by Spain on June 1 in Austria, Korea’s players and manager Uli Stielike seemed to be utterly crushed. There was doubt that the national team, which had been on a roll since Stielike assumed the head post 20 months ago, would be able to recover from a performance that had been called a “disaster.”

Based on FIFA Rankings alone, No. 50 Korea didn’t stand a chance against No. 30 Czech Republic. But the team that showed up to Prague’s Eden Arena seemed to be unfazed by the loss four days ago, as well as by the odds stacked against them. 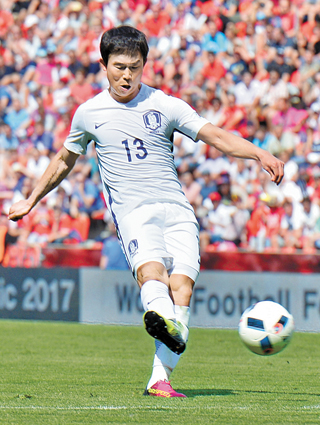 Yoon Bit-garam drives a free kick against the Czech Republic on Sunday. Yoon’s goal and assist were crucial for in Korea’s 2-1 win. [NEWSIS]

Adopting a 4-2-3-1 formation with FC Porto striker Suk Hyun-jun at the front and Tottenham Hotspur’s Son Heung-min and FC Augsburg’s Ji Dong-won on the flank, the Koreans started strong and didn’t hold back during what would become an intensely physical match.

The first goal came in the 26th minute when Yoon executed a brilliant free kick from outside the top corner of the Czech Republic’s penalty box. The 26-year-old central midfielder curled in a shot off his right foot to find just underneath the corner of the bar.

Although goalkeeper Petr Cech, who plays for England’s Arsenal, leapt to stop the ball, it wasn’t enough to halt Yoon’s perfect kick from finding the back of the net.

The next goal for the Korean side came 14 minutes later and once again, it started from Yoon’s feet.

In the lead up to the goal by Suk, Korea’s Ju Se-jong put pressure on the Czechs and Yoon eventually intercepted the passing attempt to go on a fast-break counterattack. Dribbling the ball a couple meters up the field, Yoon found Suk on his flank and put an easy pass in front of him.

Suk, who cut his left eyebrow early in the match while battling for the ball in midair, wasn’t going to miss the opportunity and nailed a shot over Cech’s head to rattle the net.

Although the Czechs lost the match, it wasn’t a lack of effort that let Korea win the game.

Tomas Rosicky, the Czech Republic’s ace who plays for Arsenal, continually made attempts to cut the deficit, attempting to match Yoon’s free kick three minutes after the Korean scored. The shot went just wide to miss the crossbar.

Czech Republic did manage to narrow the gap by one goal in the second half when center back Marek Suchy drilled in a 35-meter (115-foot) shot, deflected off Korean center back Kwak Tae-hwi.

Despite Suchy’s goal, Czech Republic had to call it a day when Gebre Selassie was sent off the field in the 60th minute. They played with 10 men for the remainder of the match, and though the team continued to relentlessly attack, the one-man deficit proved more than they could cover.

“[South Korea] pressured us in the first half and we were not able to cope with that,” Czech Republic coach Pavel Vrba said according to the Associated Press.

“Our game improved in the second, even though we were in 10 [men]. But I would prefer to win, I’m not happy we lost.”

Stielike, on the other hand, celebrated the win and was quick to commend his players.

“After the 6-1 defeat against Spain, it was important to see how much our players have recovered their mental strength,” Stielike said according to the Yonhap News Agency. “They showed that they were 100 percent recovered [from the defeat].”

“We lost to Spain 6-1, but had a better success rate in passing than we did today,” he continued. “Today, we fought hard against the opponents and showed an impressive performance in winning the ball. If we can combine good things from those two matches, I think we will make improvements in many areas.”

After Sunday’s game, it was Yoon, who currently plays for Yanbian Funde of the Chinese Super League, who found himself in the limelight.

Yoon was once dubbed the “pathfinder” who would lead the Korean football into the future when he made impressive marks early in his professional career, including scoring his first international goal and winning the K-League rookie of the year award in 2010, his debut season.

But his stardom quickly faded after his attempt to transfer to the Rangers F.C. of Scotland failed to go through in 2012. He played for Seongnam FC and Jeju United for the next three years but didn’t see much success.

After transferring to Yanbian, Yoon became determined to return to the national team. He says this was in part because when he first joined the Chinese club, some of the team’s staff jokingly wondered whether Yoon was actually Japanese because of his name, which has four letters in contrast to the typical three for a Korean.

“When people mistook me for Japanese, that really motivated me to try to make it back to the Korean national team roster,” said Yoon. “I am glad to have gotten the chance this soon.”