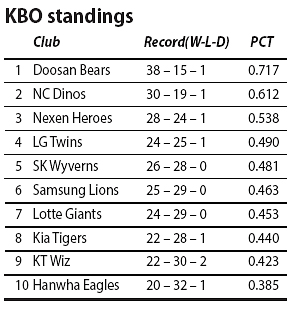 With help from relief pitchers, Eagles keep up their streak

The Hanwha Eagles are on a run once more this week, winning five games out of the six in the first week of June.

Behind the run stands the Eagles’ relief pitching lineup as well as catcher Cha Il-mok.

In the seventh inning, after Eagles’ reliever Song Chang-sik gave out a solo homer to Lions hitter Kim Jeong-hyuk and a base-on-ball to Lee Ji-yeong, Eagles manager Kim Sung-kun replaced Song with closer Sim Su-chang. Sim held strong the remainder of the seventh and the entire eighth inning as well. But in the ninth inning, he allowed the bases to become loaded without a single out. Sim fell to the ground, utterly devastated.

At this moment, Eagles catcher Cha went up to the mound and brought Sim to his feet, telling him: “It’s okay - you can do this. Let’s focus.”

Sim regained his confidence and composure, taking out two Lions batters with a double play during the next pitch. Sim got bold against the Lions’ next batter Park Hae-min, who struck out after whiffing Sim’s fastballs and forkballs.

“I thought I was in trouble,” said Sim. “But the others cheered me up, telling me that we can win and that we should focus. I simply threw pitches following Cha’s lead.”

Song, who recorded another win after Sim successfully defended the score, said, “Cha knew my pace and led me accordingly. It helped me stay balanced.”

After that win, the Eagles topped the Lions again the next day on Sunday, winning its third series in a row. Its record in the past ten games stands at nine wins and one loss. The success can be largely attributed to the relief pitching lineup, whose earned run average in the past 10 games stands at the top of the league. Six out of the past nine wins have been saves, and the relief pitchers haven’t blown any saves during the run.

While the relief pitchers are leading the Eagles success at the moment, the pitchers themselves credit Cha as the driver behind their peak performance. He has been leading the relievers to toss different types of pitches to throw the batters off guard. Cha’s leadership has been giving the pitchers confidence on the mound, but Cha himself is humble. “Pitchers are in good condition these days,” he said. “They are pitching well and this allows us to play solid games. I don’t think I did anything notable.

“To maintain our momentum, I need to be more stable behind the plate leading the game,” Cha added. “I need to do my homework and analyze who we are going up against more thoroughly.” 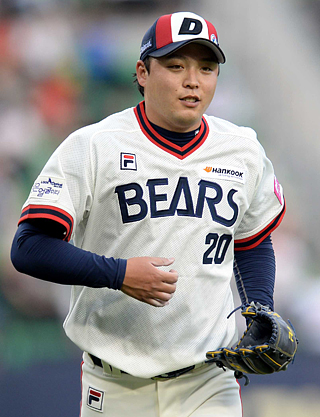 Just how much depth do the Doosan Bears have in their pitching lineup?

It seems like no one can answer this question at the moment, as another Bears pitcher has emerged out of nowhere to record a win.

This time, it was An Gyu-yeong, who is in his sixth year in the Korea Baseball Organization (KBO).

Before the home game against SK Wyverns, Bears manager Kim Tae-hyeong said it would be difficult to include setup man Chung Jae-hun and closer Lee Hyun-seung in the starting lineup. Chung has played in three consecutive games from June 2 to June 4 and Lee has been complaining about pain in his thigh for the past three days.

With the Bears lineup in crisis, Kim chose to bring An up from the Futures League, the second division of the KBO, to start.

In the Futures League, An has had three wins and three losses with a 5.13 earned run average. Sunday’s game was the first top-league game in which An has played in 1,045 days, since he pitched against the LG Twins on July 26, 2013. “I don’t know how many innings he will be able to throw,” said Kim. “But he will do his part.”

He did just that, showing stable pitching for six innings before being replaced by closer Jin Ya-kop in the seventh.

An gave out no base-on-balls and brought down the Wyverns batters with fastballs that hit 145 kilometers per hour (90 miles per hour) as well as forkballs and sliders to throw perfect six innings. His record during the game stood at seven hits conceded, no earned run and two strikeouts while going up against 22 batters to throw 86 pitches.

“I congratulate An for his first win,” said the Bears’ manager after the game.

An was an ace in high school and college, but was unable to find his place in the KBO since he joined the Bears in 2011. Without much to show, he went in for his military service in 2013 and returned before the season this year. Now that he’s off to a good start since his comeback, there is much anticipation about what he can bring to the defending champion Bears as it hunts its second straight title.

“It took me six years to claim my first win the KBO,” said An after the game. “I thought about my parents before anyone else. They have been worrying about me and I am more than delighted to be able to give them good news.

“I tried to maintain my focus in every pitch I tossed,” An added. “I played against Kim Kwang-hyun [the starting pitcher for the Wyverns on Sunday] when I was in high school. I lost that game so I really wanted to win today’s game.”