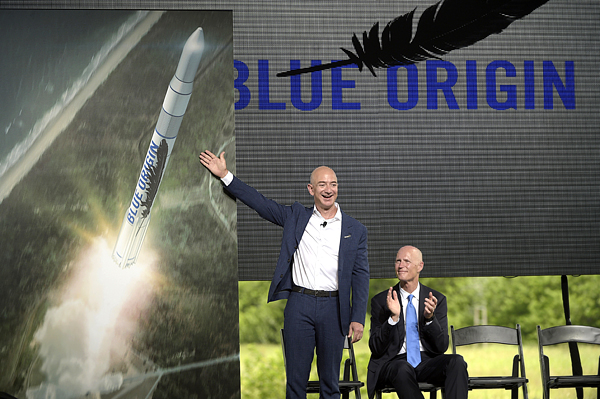 Amazon CEO Jeff Bezos, left, unveils the new Blue Origin rocket during a news conference at the Cape Canaveral Air Force Station in Florida on Sept. 15, 2015. Bezos announced a 200 million dollar investment to build the rockets and capsules in the state and launch them using the historic Launch Complex 36. [AP/NEWSIS]

As a journalist, I read a number of domestic and international newspapers. These days, Korean and American newspapers can be immediately distinguished by the headlines on the front pages, aside from the obvious difference in language.

Korean newspapers are filled with tearful and tragic expressions over incidents like the murder near Gangnam Station and the death of a repairman related to a malfunctioning screen door at Guui Station.

While the newspapers blame the government for lacking safety measures, they always conclude that the government should handle the issue. In contrast, U.S. newspapers have energetic and vibrant stories. The most popular newsmakers are not government officials but billionaires, most notably Amazon founder and CEO Jeff Bezos.

Last week, Bezos insisted that all factories should relocate to space to save the earth. He advocates the grand vision of manufacturing in space and living on earth.

“Energy is limited here,” he said. “The earth shades itself, whereas in space, you can get solar power 24/7.” Bezos set up Blue Origin to build industrial zones in space in order to save the earth, a move to resolve energy and environmental problems at once.

Is Bezos a modern Don Quixote? It may be another outrageously luxurious hobby of an eccentric billionaire. But visionaries of today are jumping into the frontiers of space exploitation, artificial intelligence and drones.

Bezos and Elon Musk of SpaceX are competing in rocket recovery and relaunch. Microsoft co-founder Paul Allen and Virgin Group’s Richard Branson also joined forces in the space industry. IT giants like Amazon, Google and Facebook are competing in the drone business. One clear fact is that Bezos was the one to get into these industries first.

While artificial intelligence reminds Koreans of AlphaGo, Americans associate it with Amazon Echo, a virtual assistant released one and a half years ago. More than three million units of the $199 device have been sold. When the user calls “Alexa,” Echo wakes up and plays music or orders pizza. Google and Apple are busy trying to catch up to Echo’s popularity.

But the field Bezos is mostly focused on today is politics. Through The Washington Post, which he acquired in 2013, he declared a war on Donald Trump. As The Washington Post exposed his issues with women, real estate transactions and lies, Trump called the paper Bezos’ toy.

But Bezos has a far more meticulous plan. He mostly stays in San Francisco and guarantees the editorial independence of The Washington Post. It has successfully turned digital, with more visitors than The New York Times.

It was a clever move to appoint Martin Baron as editor-in-chief. Baron was portrayed in the movie “Spotlight,” which won the Academy Award for Best Picture in 2016. He led the Boston Globe investigative team to expose the Catholic Church sexual abuse scandal in Boston. Bezos has a team led by Barron to investigate Trump with an army of 20 reporters.

With its cloud services, Amazon’s stock price went up threefold. Amazon leases its server capacity, as 90 percent is not used aside from during Black Friday. Even the Central Intelligence Agency has signed a $600 million cloud server contract. As private companies join the space industry formerly dominated by the U.S. government, it is transforming into a new industry.

In contrast, Korea is still led by the government. It is still unclear who will run for president next year. Politicians are busy chasing voters’ sentiment, and private companies are dispirited. Korea seems to be suffering from rapid premature senility.