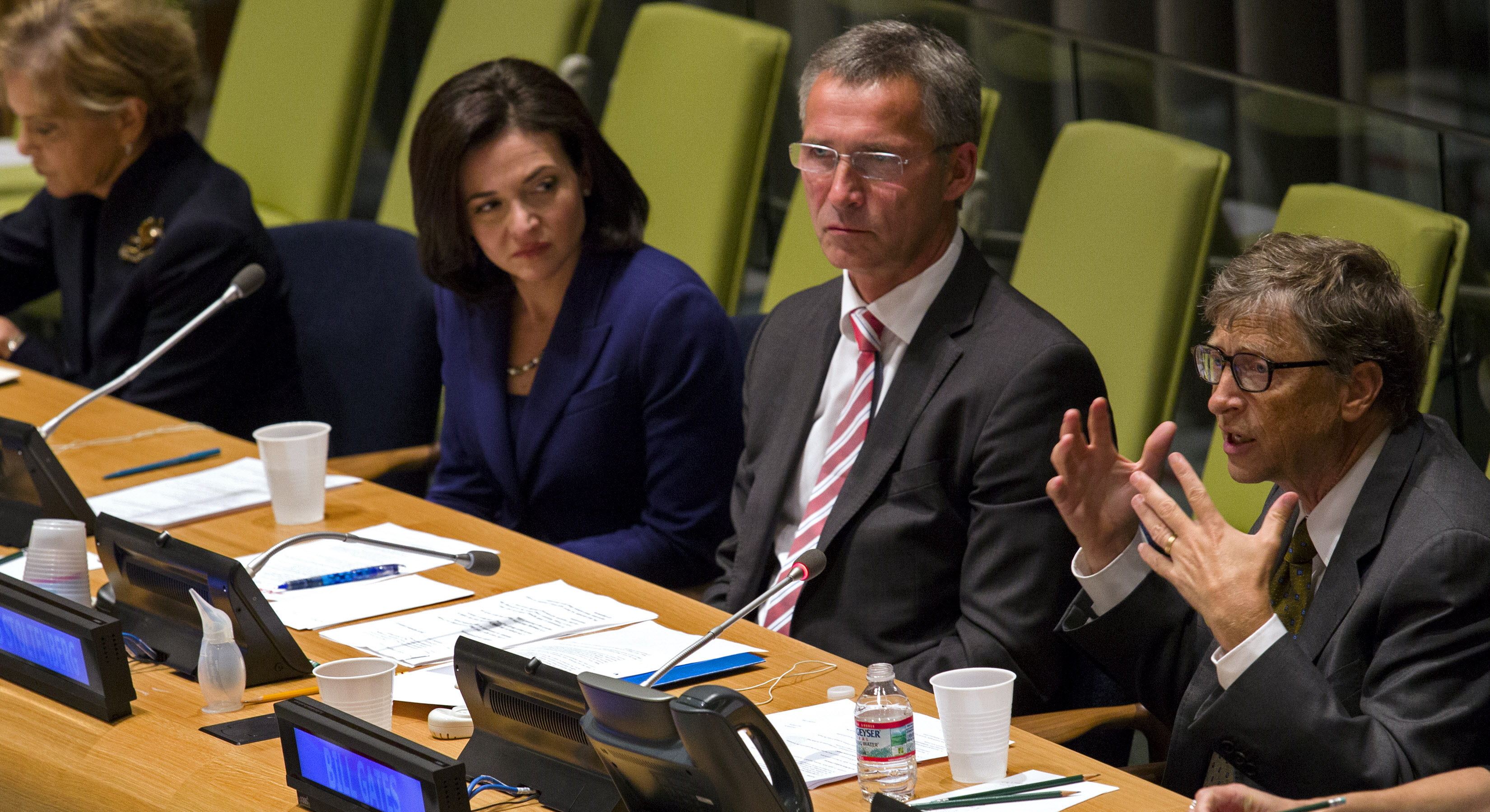 Far right, Bill Gates, co-chair of the Bill and Melinda Gates Foundation, addresses a panel during a forum called MDG Success (Millennium Development Goals), at the 68th session of the United Nations General Assembly, at UN headquarters, in 2013. [AP/NEWSIS]

STRASBOURG, France — Successful economic development has hewed to a well-known pattern. Lifting a country out of poverty and placing it on a path of sustainable growth requires hard work, the creation of a robust system of property rights and — crucially — private investment.

This method is not specific to a particular region or people. As Asia’s spectacular growth has demonstrated, it is transferable across cultures. So it is a shame that development economists and the world’s multilateral institutions are failing to apply it systematically in the developing world.

Billions of dollars of aid has been poured into developing countries, but it has not been enough, and the results have been disappointing. The World Bank estimates that one billion people still live on less than $1.25 a day, while more than 800 million do not have enough to eat.

The Millennium Development Goals (MDGs) attempted to apply a comprehensive approach to reducing poverty, but the MDGs failed to address its underlying causes.

On paper, at least, the United Nation’s new Sustainable Development Goals, put in place last year, are an improvement. The trouble is that lofty ambitions come with a high price tag, and there remains a funding gap of around $2.5 trillion if all 17 goals are to be met. A chasm this big cannot be bridged by cash-strapped governments and taxpayers alone.

That is why a recent decision by the European Parliament to back my report calling for the mobilization of private capital in the fight against global poverty is so important. For the first time in the parliament’s history, its members acknowledged the private sector as a key partner in wealth creation in the developing world. Given that the European Union (EU) is one of the biggest providers of development aid, the decision could be highly significant.

The early signs are heartening. Marianne Thyssen, the EU’s employment and labor commissioner, wants work on implementing the report to begin immediately. She has promised that the European Commission will invest more than 2 billion euros ($2.27 billion) to support the private sector in the developing world by 2020. She expects that 4.8 billion euros in EU grants would leverage at least 66 billion euros in investment in Sub-Saharan Africa, Asia and Latin America by financial institutions and private firms.

If the EU’s entire development budget was similarly maximized, we could mobilize about 300 billion euros of capital, which, if spent on acquiring equipment, plant, and technology from Europe, could give an enormous boost to the current sluggish growth of the European economies.

An important early task in achieving the desired impact will be to create an environment in which private initiatives can flourish. Currently, micro, small and medium-size enterprises account for some 60 percent of the developing world’s employment. And yet 70 percent of these businesses receive no help from financial institutions, even though investment would enable them to grow and create jobs.

We must begin to change this by providing the financial and technical assistance countries need to establish reliable banking systems and tax administrations.

The effect will be to increase the number of bankable projects in which both local businesses and international firms can invest. Potential for public-private partnerships exist in energy and telecommunications projects, in wells and irrigation, in the construction sector, in infrastructure such as roads, airports, and harbors, and in processing plants for agro industries, meat, fruit and vegetables.

Of course, stringent safeguards must be put in place. Private investors will need to agree to binding rules protecting social, environmental, human, and gender rights. To build trust, EU-level forums should be created, in which the private sector, nongovernmental organizations, think tanks and governments can discuss development opportunities.

Helping developing countries grow will stimulate investment opportunities for EU companies and open new markets for their goods. The result will be a virtuous cycle of development that benefits everyone — and that moves the world significantly closer to achieving the ambitious goals that it has adopted.


*The author is a ranking member of the European Parliament and Conservative Vice President of the Development Committee.