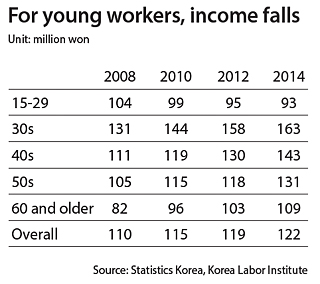 While youth unemployment remains over the 10 percent level and continues to rise, recent research shows that more people aged 15 to 29 are choosing to work in the food service industry.

According to a report released Monday by the Korea Labor Institute, a nonprofit research organization, nearly one in four people working in the food service industry is younger than 29. In 2008, that age group accounted for only 12.9 percent of employees in the industry, which rose to 23.5 percent in 2014.

“Four out of five young employees in the industry were part-time or contract workers, and they were mostly working in coffee shops and restaurant franchises,” said Chung Hyun-sang, a researcher at the institute. “It appears people in disadvantaged groups in the labor market, including young people and women over 50, are working in the industry in jobs that are relatively unstable and pay low salaries.”

The report pointed out that workers in the food service industry earn less compared to other industries in Korea and that growth in the industry’s wages is slower than inflation.

“Whether young people working temporary jobs at restaurants and coffee shops is a positive sign or not is still unclear,” Chung said. “But there are many who earn less than minimum wage and work very long hours. Furthermore, it appears that young people still in school are taking these jobs to pay their school costs and rent.”

Among young employees in the industry, 48.3 percent of student workers and 31.9 percent of graduates earned less than minimum wage.

The number of employees in the food service industry increased by 19.2 percent, from 1.72 million in 2010 to 2.06 million in 2015, according to Statistics Korea. The number has fallen significantly because many restaurants and related businesses were hit by the global financial meltdown. In 2008, the figure was about 1.84 million.

The report also showed an increase in the number of male workers in the industry. In 2008, male workers accounted for only 29.7 percent of total employees, but the figure rose to 35.9 percent in 2015.

The Korean food service industry has changed significantly in the past 25 years, the report said.

“The industry grew fast, thanks to growths in income, but the environment has been changing recently as there is more competition after various franchises and corporate-run restaurants and coffee shops moved in,” Chung added. “Due to such changes, operating profit has dropped, and owners are now trying to hire more part-time or contract workers to improve their profits.”

Meanwhile, according to data released last month by Statistics Korea, the youth unemployment rate remained in the double digits for the third month in a row, registering 10.9 percent in April among job seekers aged 15 to 29.