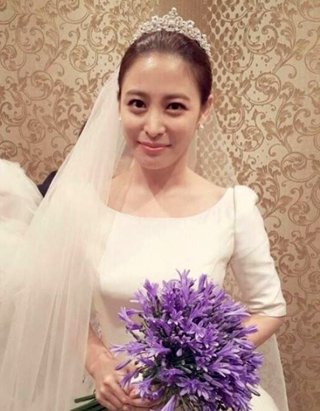 The couple walked down the aisle with only their relatives and close friends in attendance after dating for three years. They are scheduled to leave for Cuba on a honeymoon.

Park and Yun have experience working together on season two of the web drama titled “Hungry Woman” in January.

The two are known to have become a couple upon being introduced by director Kim Tae-yong, who wed popular Chinese actress Tang Wei in 2014.

Park originally debuted as a member of the K-pop girl group M.I.L.K. in 2001 with their first album, “With Freshness.” She expanded her career to acting in 2005 and worked on a number of television dramas and movies. A few of the projects she took part in include the movie “Like for Likes” (2015) and romantic comedy series “The Producers” (2015).

Yun originally debuted in 2001 as a member of Ace Media but moved to tvN in 2006. He is currently working for cable channel MBN.
By Jin Min-ji