Cheating Volkswagens may be forced off roads

Cheating Volkswagens may be forced off roads 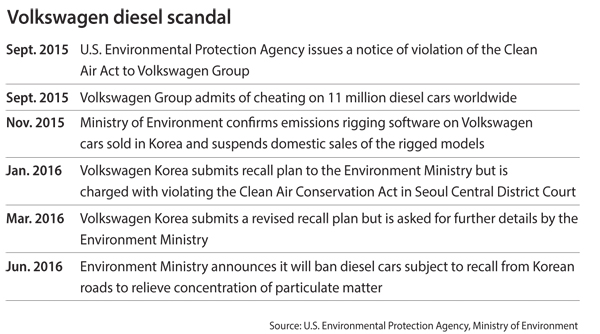 All 125,522 Volkswagen diesel cars with rigged emissions systems could be banned from Korean roads if their owners don’t get them fixed.

The measure follows the government’s announcement on Friday of its intention to reduce ultrafine pollutants by reducing the number of outdated diesel cars.

The government said it will flunk those vehicles on their regular inspections to force them off the road.

Officials at the Ministry of Environment told the JoongAng Ilbo that new procedures will be applied to Volkswagen diesel vehicles with software that falsified emissions tests. The company’s manipulation of emissions during tests was confirmed by the Korean government last November.

Yet no recalls have been carried out on the German automobiles because the Korean Environment Ministry rejected recall plans submitted by Volkswagen on grounds that the company failed to admit that it tampered with its emissions test.

“According to the measures against ultrafine dust, we will reform regulations in the second half of the year that will require all owners of diesel cars that are recalled to follow through,” said Hong Dong-gon, director of the environmental transport division at the Ministry of Environment.

Owners are generally given a year and eight months to get their car fixed when they receive a recall notification from the manufacturer. However, if the owners are slow to fix their cars, the government can extend the period.

There have been concerns that some owners of the problematic Volkswagens might not get their cars fixed after they receive recall notices because the fix will lower the fuel efficiency of the vehicle, resulting in higher fuel costs. The Environment Ministry believes the German automaker rigged the emissions tests in order to raise the model’s fuel efficiency, which was a prime reason for its popularity in the Korean market.

As the current regulation has no enforcement power, owners don’t have to follow through with a recall notice.

Under current law, a diesel vehicle has to get a regular checkup within the first four years of purchase. Then it gets a regular checkup every two years. The government’s goal is to levy a fine of 500,000 won ($430) on the owner of a diesel car that does not comply with a recall by failing it on an inspection. If the owner continues to refuse, the government can suspend the vehicle from being driven by confiscating its license plate.

Any diesel cars that have been driven for more than 10 years or for more than 160,000 kilometers (99,000 miles) will be required to be recalled if the regulation is reformed.

The Volkswagen vehicles at issue were sold between 2009 and last year.