Daiso Korea is all about quality, not just price

Daiso Korea is all about quality, not just price 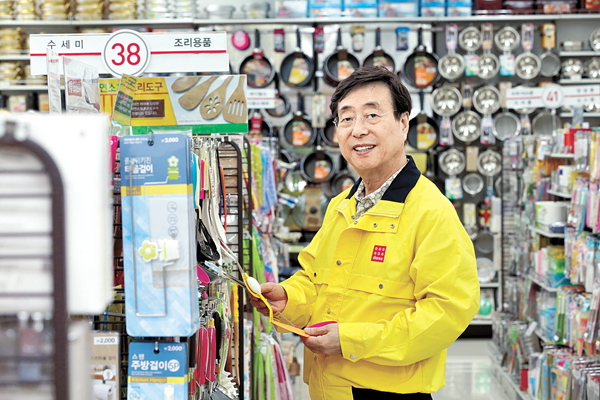 But they don’t know much more about the company, despite having more than 1,000 locations in Korea.

“A lot of people still think we are a Japanese retailer,” Park Jung-boo, CEO of Daiso A-Sung, said in an interview with the JoongAng Ilbo last month. “And they don’t know that our sales are over a trillion won.”

Park established the company in 1997 under the name ASCO Even Plaza. It was the first company to adopt the concept of uniform pricing in Korea.

Japanese retail chain Daiso, the original 100 yen ($0.93) store, thought highly of ASCO’s products and signed an exclusive deal with Park in 2001. Park received a 4.3 billion won investment from Daiso to change the name of his ASCO Even Plaza stores to Daiso.

Daiso Korea has continued to grow for the past 19 years. Its sales were 1.2 trillion won last year, and there are now 1,080 stores around the nation selling some 30,000 products. More than 600,000 customers visit Daiso stores every day.

Park said the company was able to continuously expand thanks to its uniform pricing concept.

In brick-and-mortar stores, nothing costs more than 5,000 won (although online, some products do). In addition, 50 percent of all products are manufactured locally.

Ironically, Daiso’s roots are in product quality. When Park was a senior at an engineering school, he received a quality-control engineer license and then specialized in exporting products to Japan. He said he learned the importance of quality from his experience exporting to Japan.

“No customer will ever shop again at our stores if the price is low and the quality poor,” he said. “I hate people saying cheaper is better.”

Daiso deals directly with some 800 suppliers in Korea and overseas, cutting out expensive middlemen in the process. Park built an automated distribution center in 2012.

Beyond the uniform prices, Daiso likes focusing on great designs and creative ideas. It has more than 50 employees designing and another 50 developing new products.

“In the retail industry, companies need to discover the customers’ needs in order to survive,” Park said. “We are releasing more than 600 kinds of products a month and working hard to do better all the time.”

Daiso introduced a new slogan last month: “All you need is here, at the price you want, and we are everywhere.”

Daiso’s goal is to achieve yearly sales of 2 trillion won by 2020.

“Not every customer is satisfied with online shopping,” Park said. “We plan to make a company that will allow customers to enjoy shopping for high-quality products in our stores.”