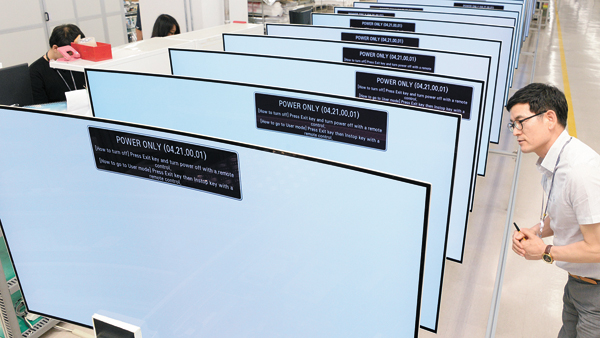 But inside the complex is a vital operation: the world’s second-largest TV maker is producing organic light-emitting diode (OLED) televisions, a new category of next-generation TVs pioneered by the tech giant.

The Gumi operation is capable of making about 10,000 OLED TVs per month, the largest among other OLED-producing plants abroad.

The plant, which consists of three facilities, also serves as a testing ground for the latest technology ahead of mass production since its inception in 2013.

A close examination of a conveyer belt stretching 140 meters (460 feet) reveals where the focus lies in premium television manufacturing.

An assembly section that combines OLED panels with back covers measures just 30 meters.

In a 60-meter product inspection area, workers examine to see if assembled products work properly. Through accelerated aging tests, factory staff check the color accuracy and power supply of each TV. The remaining section of the conveyer belt is devoted to packaging the products.

“We try to deploy both the accuracy of automated technology and preciseness of human beings,” said Yim Byun-jin, a deputy director of the TV production team at LG, who gave reporters a tour last Friday.

It was the first time LG Electronics showed its OLED factory to a group of Korean reporters.

The OLED models released this year and other randomly-selected older lineups undergo another 72 hours of aging tests on the second floor of the plant.

This time around, the test checks whether the OLED TV sets maintain consistent image quality and brightness even after extending viewing hours. Other rooms use aggravated conditions of heat over 40 degrees Celsius (104 degrees Fahrenheit).

To put the finished products under hard conditions, the manufacturer reopens fully-packaged TVs.

“We could have just taken randomly-selected products off the conveyer belt before packaging to increase convenience,” Yim said, “but we don’t, because we want to check the TVs from the perspective of consumers. When reopening the item, we can also look at conditions of packaging.”

The TV market has become an intense battleground between Samsung Electronics and LG Electronics, Korea’s two largest tech companies, since both bank on their difference in technology for premium models.

LG explained some sensitive issues over the performance of OLED TVs, reiterating that it stands out compared to “conventional technology used by a rival company.”

Samsung has embraced quantum-dot liquid crystal displays based on nanocrystals.

“LCD is LCD, and OLED is OLED. The two are in a whole different category,” said Lee Byung-cheol, an executive director at LG Electronics. “LCDs use a backlight to illuminate their pixels, while OLED pixels actually produce their own light, which is a fundamental difference between the two.”

The director also disputed the argument that OLEDs have a shorter lifespan. Kim Hyun-seok, president of Samsung Electronics’ visual display division, cited the short lifespan as one reason the company refrains from pursuing OLED technology.