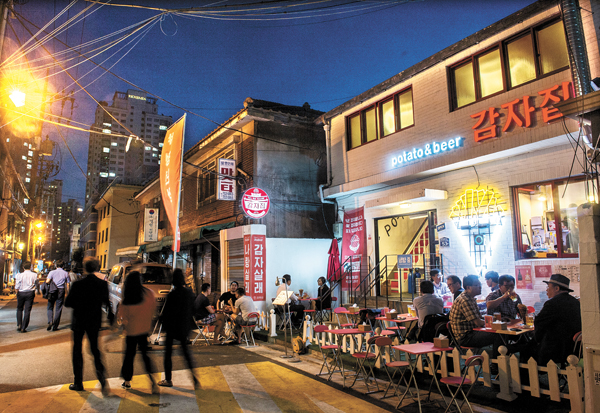 In Yongsan, Seoul, a new hot spot is rising near Namyeong station on line No. 1. The place is dubbed Yeoljeongdo, which means island of passion. This is the last old neighborhood in the area, which is now surrounded by high rises and residential and commercial complexes.

On a Thursday night, a young married couple with children enjoyed a glass of wine at a small cafe along the old printing alley off Wonhyoro 1-ga in Yongsan. There are only five tables at the cafe, which is surrounded by old shops and factories, but business has been growing since the cafe opened in October.

“We expect the number of customers to increase further during the summer as people seek places that are cool,” said a cafe employee.

The area is surrounded by high rises like the KCC Welltz Tower, Iaan Apartments and Iaan Premier. The neighborhood between these high rises has remained its old traditional look after developers have cancelled previous plans for growth, realizing that redevelopment of the area wouldn’t be profitable because land value has surged excessively.

Expecting redevelopment, however, the old printing businesses in the neighborhood relocated to the Paju publishing city. Yeolijeongdo quickly turned into a ghost town.

The neighborhood began to see a resurgence when two young entrepreneurs opened six restaurants in Yeoljeongdo simultaneously in November 2014.

They launched restaurants in Yongsan in part because they wanted to create a commercial district of their own as they often had to move stores when businesses picked up and landlords asked for higher rents. The cheap rent on Yeoljeongdo seemed like a good deal. In 2014, a rent on a 33-square-meter (35-square-foot) place in Yongsan old printing alley was between 500,000 won ($428) and 700,000 won a month. Deposits weren’t required. The Kims decided to even minimize their spending on interior design and retained the old appearances from the printing factories. It blended in perfectly with the unique look of the neighborhood’s streets.

“It’s not like the food here tastes amazing to have the word spread or unique but it’s a good place because it is good enough for the price and it’s a place that one could visit easily,” said a 37-year-old customer, who asked to be mentioned only by Lee

The Kims are also working on opening a late-night market every second Saturday of the month with food trucks and street vendors while also holding street performances. They also plan a compact park with wall paintings.

Although the neighborhood is seeing an influx of customers, the Kims are worried about too much growth.

“For people running small businesses there is nothing scarier than the notion of the neighborhood gaining too much popularity,” said Kim Yeon-seok, as gentrification would lead to larger franchises setting up shop and driving up the neighborhood’s rent.

“The goal is ‘sustainable’ businesses rather than trying to raise revenues sharply,” said Kim Yeon-seok. “Our targeted customers are the neighborhood residents and nearby office workers.”

But changes are already abreast in this neighborhood.

Along the 200-meter (656-foot) alley there are roughly 20 cafes, restaurants and bars. In between the alleys, small accessory shops, clothing stores and flower shops have sprung up.

However, other merchants are already finding it difficult to get in.

“Even here [in Yeoljeong island] there’s hardly any stores available on the main street,” said Kim Hyun-gyeong, 35, who searched the area to open a shop but recently gave up. “Unlike in the past [the landlord and previous tenants] are asking for deposits and gwonrigeum.”

Gwonrigeum is a deposit that new tenants of stores give to previous tenants for inheriting its businesses’ reputations and customers. The payment is not protected by law but the premium rises if the store is in a popular commercial area and if it’s on the ground floor.

The commercial area in the neighborhood is now expanding toward Hyochang Park.

Since the mid-2000s, gentrification has been picking up speed even in areas that haven’t been traditionally popular commercial districts like Gangnam.

Samcheong-dong in Jongno, downtown Seoul, was once a residential neighborhood. But today it’s a famous tourist attraction. The Gyeongridan area in Yongsan barely had outside visitors in 2010. But in just two years it has become one of the hottest go-to spots in Seoul.

The Seoul government has been trying to design measures that would protect the tenants of commercial stores from gentrification. In fact, it was one of the seven key projects that the Seoul government announced. The government targeted seven districts, including Daehangno, Insa-dong, Sinchon, Hongdae and Hapjeong, where it would support commercial businesses so that they wouldn’t have to worry about rising rents.

However, more than half a year has gone by without a plan.

“It’s an issue regarding personal wealth and the situation is different for each neighborhood, which makes it difficult,” said a Seoul government official.

“Haebangchon, which is one of the nine areas that the government designated, is in the process of forming its own ecosystem,” said an official in the food and service industry. “It’s questionable if the small entrepreneurs in the neighborhoods are appropriate to be designated as those who need protections, and also it is questionable how much it would be effective.”

It may be an issue left to landlord and tenants, like those connected to Spindle Market.

The market, located at the end of Gyeongridan in Yongsan, was established this year by Chang Jin-woo, 30. The 11 restaurants within the market pay 20 percent of their revenue as rent while the building owner takes care of the facility management, including interior design.

The strength of this partnership is that entrepreneurs can start restaurants with just a small amount of capital and don’t have to decorate or purchase basic equipment like ovens and burners. Meanwhile, the landlord enjoys hefty profits as the customer base grows.