Classic Korean tales get a twist on stage

Classic Korean tales get a twist on stage 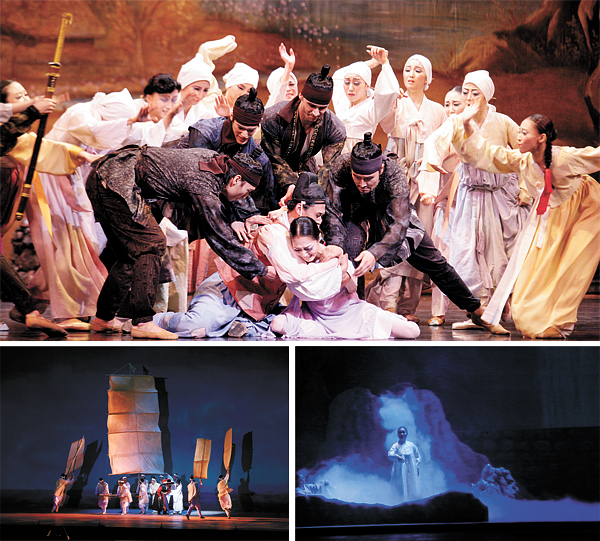 This month, three notable Korean folktales are being brought to the stage. Top: Universal Ballet is staging its representative repertoire, “Simcheong.” Above left: The comedy “Baebijang-jeon” is being recreated in the form of an opera. Above right: The tale of the gumiho, or nine-tailed fox, has been remade into the opera “Miho-jeon.” [universal ballet, the muse opera, the nuova opera]

It was the moment when Simcheong had to decide what to do - whether to dive into the dark, swirling sea to let her father gain his eyesight or not. Sailors danced menacingly beside her.

At last, she dove in alone with fleeting hope of making her father happy. Her pale pink hanbok fluttered on the stage, contrasting with the dark costumes of the sailors.

But the beautiful costumes and stage sets cannot take all the credit; rather, the strength of the story has led to its success, even globally.

The show made its debut 30 years ago with the creation of Universal Ballet. The piece is the signature show of the company’s UBC World Tour program, which started in 2011 and has gained international recognition in 40 cities outside Korea since then.

This story emphasizes the value of “hyo,” which is filial affection and duty toward one’s parents, which is often stressed in Confucian culture, yet it blends well with the genre of ballet.

The piece is returning this Friday through June 18 at the Seoul Arts Center. The upcoming performances will be even more special with their cameo appearances: For example, Julia Moon, the head of the Universal Ballet, appears in the show for a scene where Simcheong recalls her past.

With this successful example of adapting a Korean traditional folktale into a classical genre, other cultural mash-ups that combine tales with opera are emerging these days.

For example, the Korean comedy “Baebijang-jeon,” which was originally delivered in the form of pansori (traditional narrative singing), is being performed as an opera by The Muse Opera.

The pansori version of the tale, developed by the National Theater of Korea, has been a big hit in Korea, as it has many elements of comedy that today’s audiences can easily enjoy.

“Babijang-jeon” satirizes the hypocrisy of the ruling class during the Joseon Dynasty (1392-1910). An official, Baebijang, acts in a dignified manner, yet he is allured by Aerang, a gisaeng (traditional entertainer), who mocks him later with the support of Bangja in front of the crowd.

Since the funny tale has proved its popularity, The Muse Opera remade it into an opera in 2015. The opera launched the performance in effort to “develop a repertoire that suits the Korean sentiment while being delivered in the form of opera,” according to a press release.

Rhee Jung-eun, the head of the opera who directed the piece, said, “Korea’s classical repertoire is limited compared to the outstanding classic infrastructure it has.” She added that it seemed necessary to expand the repertoire of Korean performances.

Having had its premiere in January 2015, the show is returning June 17-18 at the National Theater of Korea.

Korean performing arts experienced a boom in 2010 and have been experiencing steady growth ever since. According to an annual report from Arts Council Korea, the number of performances increased 1.8 times from 2009 to 2010, has been increasing steadily.

With an increase in the market size, domestic production companies are developing performances based on diverse narratives and motifs. A considerable number of large-scale creative domestic musicals are based on foreign narratives: notable examples are “Frankenstein,” “Mata Hari” and “Salieri.”

Meanwhile, Korean traditional stories are being brought to the stage through opera and ballet, creating an interesting blend of East and West, contemporary and traditional.

This month, another ancient tale is being reborn: The legend of the nine-tailed fox, or gumiho, has been transformed into opera by The Nuova Opera. It had its premiere in 2015.

The gumiho appears in the legends of East Asian countries including Korea, China and Japan. The fox can turn into a bewitching woman to seduce humans. The opera, “Miho-jeon,” centers on the love story of a human and the fox, in spite of the longstanding animosity between humans and the creatures. It will run from Saturday to Sunday at the National Theater of Korea.