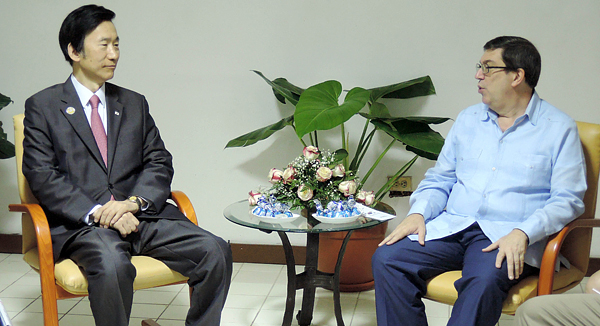 South Korean Foreign Affairs Minister Yun Byung-se, left, speaks with his Cuban counterpart Bruno Rodriguez on Sunday at the Palace of Conventions in Havana, in the first foreign ministerial meeting between the two countries since diplomatic ties were severed in 1959. [MINISTRY OF FOREIGN AFFAIRS]

The 75-minute closed-door meeting was held on the sidelines of the seventh summit of the Association of Caribbean States (ACS), which ran for three days since Friday.

Yun departed Seoul on Saturday to become the first foreign minister from South Korea to visit Havana since diplomatic ties were severed in 1959 following the Cuban revolution.

Havana is a close ally of Pyongyang, and diplomatic analysts say restoring ties will not be easy. Cuba is one of four countries Seoul has yet to normalize ties with. The three others are Syria, Kosovo and Macedonia.

The discussion was “very friendly, serious and frank,” Yun told reporters after the meeting.

“Well-begun is half done,” Yun continued, reciting an old proverb. “We’re considering a variety of follow-up negotiations in the hopes that [Seoul and Havana] make contact on multiple levels.”

When asked if talks could lead to the formal establishment of diplomatic relations with Cuba, the top diplomat avoided a direct answer but said Seoul would make “a lot of efforts” based on a “certain road map” to improve bilateral ties.

While very little is known about what the ministers discussed, diplomatic sources with knowledge of the session hinted that “issues of mutual interest” were brought up and that discussions were so smooth that Rodriguez willingly rearranged his schedule to speak for an extra 45 minutes with Yun.

The meeting was initially scheduled to run for only 30 minutes, the traditional length for bilateral talks held on the sidelines of a summit.

Accompanying Rodriguez during his meeting with Yun was Gerardo Penalver Portal, the director general for foreign affairs at the Cuban Ministry of Foreign Affairs, a clear sign that Havana was “serious” about the bilateral meeting with Seoul, sources said.

While South Korea’s Foreign Affairs Ministry did mention to local press several days ago, under a strict embargo, that Yun would separately meet with his counterpart in Cuba’s capital, both Seoul and Havana worked to keep the historic meeting as low-key as possible.

In contrast to South Korean reporters being allowed to visit the convention venue before the meeting, Cuban journalists were banned from entering. It was also reported that Havana, at first, did not want South Korean media to cover the event but later gave the green light after discussing the issue with Seoul.

An anonymous source said North Korea was the main reason Havana was concerned about media attention. Cuba did not want too much publicity about the meeting because Pyongyang is its “blood ally,” the source said.

Seoul, on the other hand, did not want advance publicity, the source continued, because Pyongyang might have tried to block the meeting.

The diplomatic relationship between Pyongyang and Havana, both Communist regimes, dates back to 1960. In the 1980s, North Korea supplied Cuba with 100,000 AK-47 rifles after the Soviet Union declared it could no longer provide military aid against a feared U.S. invasion.

When Yun declared Seoul would normalize relations with Cuba in February 2015, declaring it one of the ministry’s priorities of the year, North Korea quickly responded by sending its then-foreign minister, Ri Su-yong, to Havana for a meeting with Rodriguez.

Ri reportedly stressed “excellent relations” between Havana and Pyongyang at the time, prompting South Korean analysts to believe that North Korean leader Kim Jong-un was fearing a loss of one of the country’s few close allies.

Last month, Kim Yong-chol, a vice chairman of the Workers’ Party central committee in North Korea, who is believed to have masterminded the 2010 sinking of South Korea’s Cheonan warship and the 2014 cyberattack on Sony Pictures Entertainment, visited Cuba and met with Raul Castro, president of the Council of State.

Seoul did not mention whether Pyongyang was informed about the meeting between Yun and Rodriguez.

A diplomat said on the condition of anonymity that Cuba presented its “best-possible protocol” for Yun, pointing out that the car provided for his visit, a “high-end imported vehicle” worth nearly 100 million won ($85,700), was escorted from Havana’s airport to the downtown area.

Road traffic was controled, the diplomat added. The level of protocol was similar to what Korea’s closest allies provide during official visits.

At the end of his visit, Yun told reporters that he personally felt a “mutual consensus” had been established with Havana, as evidenced by the “unconventionally long” meeting with Rodriguez as well as the “thoughtful consideration” shown by the Caribbean state during the ACS summit.

Yun’s trip to Cuba came shortly after Washington restored diplomatic relations with Havana and President Park Geun-hye returned from a four-nation tour in Ethiopia, Uganda, Kenya and France, a symbolic demonstration of Seoul’s goal to build ties on new fronts.