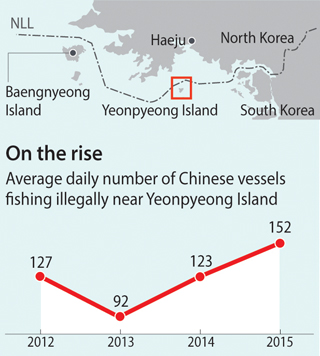 Sailors on the 15-ton and 22-ton boats were sleeping and offered no resistance to being captured. An analysis of GPS records on the boats revealed that the two vessels intruded across the NLL 16 times since June 3.

Eleven Chinese sailors from the two boats were transferred to the Incheon Coast Guard as soon as they arrived in Yeonpyeong Island. The Incheon Coast Guard sought arrest warrants Monday for the two captains of the seized boats for violating the Territorial Sea and Contiguous Zone Act, and decided to expel the remaining nine sailors.

“The sea around the NLL is a spawning area for blue crabs,” said Kim Kab-bin, one of the five captains who seized the Chinese boats, in an interview with the JoongAng Ilbo on Monday. “A rich ecosystem is there because the area is rarely approached, being a de-facto inter-Korean maritime border. The Chinese know this and take everything they can get there, leaving our waters devoid of crabs.”

The Incheon Coast Guard said Monday that it will not pursue legal charges against the fishermen who captured the Chinese vessels. A similar case occurred near Yeonpyeong Island in 2005 when fishermen seized four Chinese boats that illegally crossed the NLL. None of the fishermen were legally charged.

Illegal fishing reduces the amount of crabs caught every year in Korea. Last year’s crab catch was 6,721 tons, a 30 percent fall from 2013’s 9,984 tons. At the same time, more and more Chinese vessels are reported along the NLL by the Coast Guard.