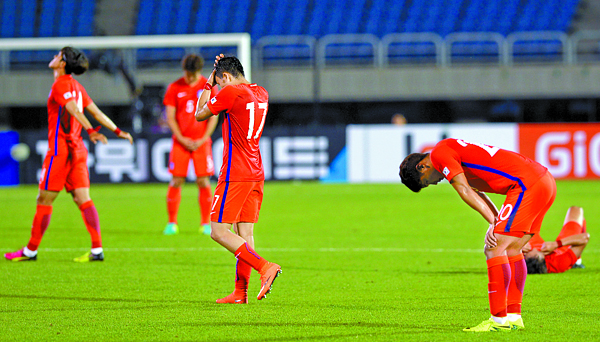 Korean players disappointed after tying with Denmark on Monday during the Olympics prep tournament. With the Olympics around the corner, the tournament provided the Olympics team insights on how it should go about in its final preparation for the Summer Games. [NEWSIS]

Korea’s Olympic football team wrapped up its last major preparatory step before the Summer Games kick off in August.

As the rehearsal for the Rio Olympics, Korea hosted a football tournament June 2-6 with Nigeria, Honduras and Denmark.

With the former national team midfielder Shin Tae-yong at the helm, the Korean team finished the five-day tournament on Monday as runner-up with one win and two draws after Denmark, who finished first with two wins and one draw.

Korea began the tournament on June 2 against Nigeria.

The African team, which won gold during the 1996 Atlanta Olympics and silver 12 years later in Beijing, showed off its offensive capabilities throughout the entire match, catching the Koreans off-guard with repeated near-goal attempts. The shot by Erhun Obanor in the 55th minute, which bounced off the crossbar, was especially startling.

But despite the attempts by both teams to break the silence, the game remained goalless until well into the second half. It wasn’t until the 85th minute that the outcome of the match was decided. Choi Kyu-baek, the center back from Jeonbuk Hyundai Motors, salvaged the Korean team from a possible tie game by calmly pushing in a shot off his right foot. The remaining five minutes weren’t nearly enough for the Nigerians to net an equalizer.

After edging Nigeria 1-0, Korea faced Honduras on June 4, where they tied 2-2.

Honduras’ under-23 team qualified for the Olympics as runner-up in the Confederation of North, Central America and Caribbean Association Football (Concacaf) after Mexico and will make their fourth Summer Games appearance this year. Coming out of their run into the quarterfinals during the London Olympics in 2012, Honduras is expected to advance well into the knockout stage in August. The team was expected to offer the Koreans a tough game, and they delivered.

Honduran star Anthony Lozano scored two goals in the first 20 minutes. Jeju United striker Kim Hyun scored in 34th minute, but it wasn’t until the last minute of the match that Korea was able to even out the score to make a 2-2 draw.

After Honduras, Korea battled Denmark on Monday. It had a promising start, scoring the opener in the 39th minute when Moon Chang-jin found the back of the net with a shot from the top of the penalty box. Throughout the entire match, the Danish team knocked on the Korean goal but was unable to match the score.

But just as Korea thought it had secured a win to top the tournament, Nicolai Brock-Madsen emerged out of nowhere during the injury time to equalize the match. Brock-Madsen’s shot deflected off a Korean defender and was chipped high in the air to find the back of the net past goalie Gu Sung-yun.

“Instead of finding our problems through the tournament, I realized that this team can display different styles of the game depending on the players on the pitch,” Shin said about the tournament according to Yonhap News Agency. “The tournament has boosted our players’ confidence that they can show their style of play against whichever opponents.”

When asked about the wild card system in the Olympics football tournament, which allows up to three players over the age of 23 to play in the otherwise U-23 event, Shin said that he is trying to find talent in defense, which is considered the current team’s critical vulnerability. “I am talking with the teams but discussion is not going as smoothly as I wanted,” Shin said. “If the schedule continues to be delayed, I might not select a wild card at all.”

When asked about Son Heung-min joining the team as a wild card, which Shin announced about two months ago, he said, “To be honest, I am considering [not having him join the team if there are further delays].”