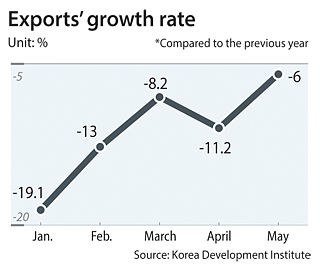 Korea’s state-run think tank once again warned that overall economic activity is still slow and that it will likely remain sluggish for the near future.

The Korea Development Institute (KDI) said Tuesday that the recent fall in mining and manufacturing production implies a slowdown in Korea.

The think tank added that although the decline in exports decreased last month, a fast improvement in export conditions is unlikely, considering weak external conditions and stagnant trade volume.

“Mining and manufacturing production and shipments waned further due to reduced workdays amid the continued decline in exports, indicating a contraction in overall production activities,” the KDI said in a report.

“The manufacturing capacity utilization rate tumbled to 71 percent in April, down from 73.7 percent in March,” the report said. “This implies persistent sluggishness in overall production activities.”

May’s exports fell 6 percent over the previous year, a smaller decrement than the 11.2 percent drop last month. The KDI said conditions aren’t favorable for an improvement.

“Declines were observed in most key items, including petroleum products, vessels, IT-related products, and motor vehicles and parts,” the report said. Exports to the United States rose, while it fell for China, Japan and European Union members.

Facilities investment, or investments on equipment and machinery, fell 2.7 percent in April compared to the previous year. It has continued to contract for six consecutive months.

“Transport equipment rose, while machinery fell, and persistent low levels of leading indicators imply that facilities investment will likely remain sluggish for the time being,” the KDI said.

“Sales of durable goods rose 7.9 percent, largely thanks to passenger car sales that rose by 10.5 percent, and non-durable goods rose 3.1 percent,” the report said. “Service production exhibited a slightly reduced growth, as growth in financial and insurance activities moderated and that in real estate, rental and leasing turned to a decrease.”

Meanwhile, the KDI in late May trimmed its economic growth outlook for this year to 2.7 percent, down 0.4 percentage points from December’s prediction.