Tzuyu, Seulgi will fight over food on show

Tzuyu, Seulgi will fight over food on show 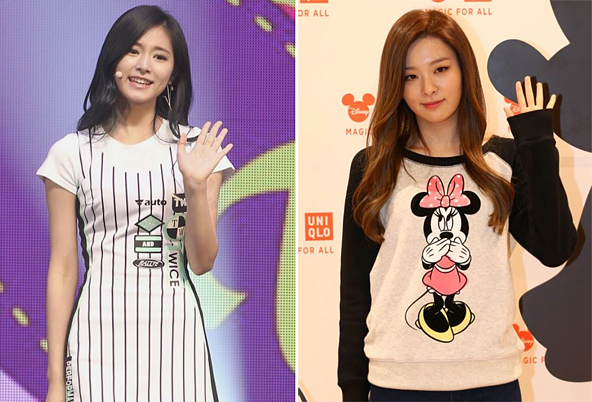 Tzuyu from K-pop girl group Twice, left, and Seulgi of the idol group Red Velvet have been confirmed to join an upcoming JTBC reality program tentatively titled “Well-Eating Girls,” according to the television network on Tuesday.

The variety program, expected to be released in early July, is a meokbang (eating show) battle featuring girl group members.

Tzuyu, the 16-year-old Twice member, has proven to be a good eater on the SBS food show “Baek Jong-won’s Three Great Emperors,” in which she appeared as a guest and ate numerous items including chicken, meat noodles and hot dogs.

She also appeared in the KBS2 entertainment show “Looking Back at Myself” and showed her fans how she could eat unusual foods such as spoon worms and sliced raw octopus.

Her enthusiastic eating of convenience store snacks in the Han River Park, which was streamed through the Naver app in September, caught many people’s interest.

The upcoming program will be hosted by three popular comedians: Kim Sook, Jo Se-ho and Yang Se-hyung. Singer Kim Heung-guk, who is gaining a high profile as an entertainer, will join the program, too.