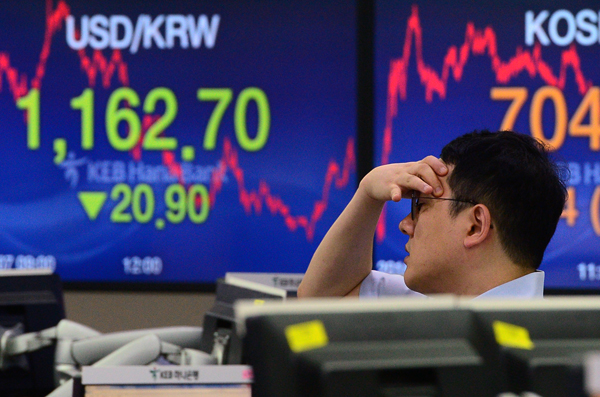 An electronic board at KEB Hana Bank headquarters in central Seoul shows the won’s value fell 20.9 won to 1,162.70 against the U.S. dollar on Tuesday after news that the Federal Reserve might rethink its rate increase plans. The Kospi, however, rallied 25.79 points to close at 2,011.63. [NEWSIS]

After U.S. Federal Reserve Chair Janet Yellen suggested a slower rise in U.S. interest rates, the Kospi rallied to surpass the 2,000 mark for the first time in 40 days on Tuesday, thanks to a buying spree by foreign investors.

The Kospi closed at 2,011.63 on Tuesday, up 1.3 percent from the previous session on Friday. Other major Asian stock indices, including Japan’s Nikkei225 and the Hang Seng China Enterprises Index, saw rallies on the same day.

Yellen said the Fed funds rate needs to rise “gradually over time” at the World Affairs Council of Philadelphia on Monday, local time, indicating that the Fed was rethinking its rate hike plans.

The chair called a May U.S. jobs report “concerning” and implied she wants to wait and see more economic data before the next hike.

“If incoming data are consistent with labor market conditions strengthening and inflation making progress toward our 2 percent objective, as I expect, further gradual increases in the federal funds rate are likely to be appropriate,” she said.

Before the May jobs report, analysts and investors across the globe had high expectations that the Fed would increase rates at the next Federal Open Market Meeting scheduled for June 14 and 15.

Since any upward adjustment of U.S. interest rates has long been anticipated, it will have a limited impact on the Korean market, analysts say. But it does affect the decision-making process of the Bank of Korea (BOK).

As the United States postpones its rate increase, pressures are mounting on the BOK to cut its key rate to help boost the sluggish domestic market.

According to a recent BOK report, the first-quarter gross domestic product (GDP) grew 0.5 percent, increasing less than 1 percent for the second straight quarter. Inflation stood at 0.8 percent, way below the BOK’s 2.0 percent target.

Although the country’s gross national income (GNI) rose 3.4 percent in the first quarter compared to the previous quarter, both households and businesses cut back on investments.

Private consumption growth dipped 0.2 percent in the same quarter despite the government’s efforts to boost spending by extending the individual consumption tax cut on luxury items like automobiles until June. Exports have been declining for 17 consecutive months, although the rate slowed slightly in May.

Consumers and businesses are turning more pessimistic about the economy because of the ongoing restructuring of the shipbuilding and shipping industries, which might produce a significant growth in unemployment.

“Aggressive fiscal and monetary measures are needed, including an interest rate cut,” said Hong Jun-pyo, head of macroeconomic analysis at Hyundai Research Institute. “It is less likely that the BOK would lower the rate this month before a Fed decision. But a rate cut is needed to stimulate sluggish demand.”

The BOK is scheduled to hold its monetary policy committee meeting on Thursday, and there is a high likelihood it will freeze the rate at the current 1.5 percent for the 12th month.

“We have called for a cut in the 2Q since last year,” wrote Joseph Incalcaterra, an HSBC economist, in a recent report. “While the logic behind this call has not changed, timing it precisely is tricky [because of the restructuring decision]. We thus push back our call for a 25 [basis points] cut to 3Q.”