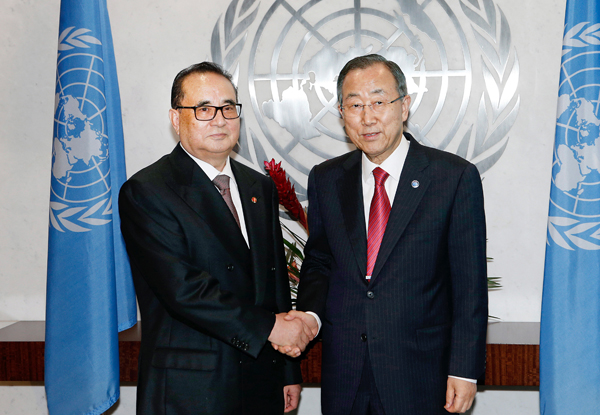 It was when North Korea was focused on the fifth nuclear experiment despite intense sanctions by the international community. Ban briefly discussed the climate change and UN-North Korea relations to Ri. But he did not mention the nuclear issue.

It was explained that the secretary general was receiving each representative briefly, and the welcome was a natural attitude.

But was it the only choice? He could have conveyed the concerns of the international community at the encounter. He was dealing with the person in charge of North Korea’s foreign policy. A leader can deliver messages with a firm handshake, a cold facial expression or an intentional neglect. But As Ban and Ri shook hands, Ri’s face was far from helplessness from being isolated from the international community. If the signing ceremony didn’t seem appropriate, Ban could have met with Ri separately to urge Pyongyang to abandon the nuclear program. But it never happened.

When it was reported in November, 2015 that Ban was planning a visit to North Korea, the United States responded coldly. Washington doubted the effect of Ban’s visit to shake hands and take photos. U.S. Ambassador to the United Nations Samantha Powers said in an interview that she hoped Ban continue to strongly respond to the denuclearization and human rights condition. However, Ban’s vision for the visit seemed to be ambiguous at the time. It was not clear whether he was trying to bring North Korea to the negotiation table and urge it to give up nuclear development and how he would address the worst human rights condition on earth. In 2016, North Korea went on with another nuclear test, and Ban’s project of visiting Pyongyang went down.

At the Kwanhun Club meeting in late May, where Ban strongly suggested his presidential bid, Ban said that he was the only one to maintain talk channels between North and South Korea. In fact, he had frequently met with Ri Su-yong. He may have some secret contacts. But if he does not have the objective and conviction to make Pyongyang give up the nuclear program and not tolerate human rights concerns, his North Korea visit will be not much more than a showy event.

At the UN headquarters briefing in New York on June 1, he was asked on the correlation between his North Korean visit and presidential bid. A reporter provocatively asked if he could say what he does in the remaining seven months of his tenure would be unrelated to his presidential candidacy. Ban will be met with these suspicious views often. His accomplishments of passion and devotion from the past 10 years would come under scrutiny. Ban asks the media to help him bring a successful conclusion. But people will continue to doubt his sincerity. And Ban is the one who brought these suspicions onto himself, and that’s what makes the situation so regrettable.