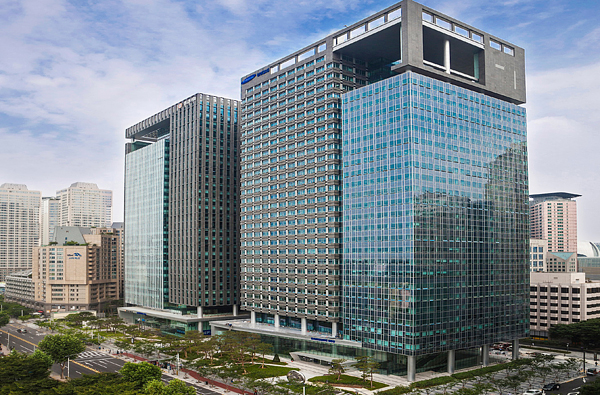 A computer-generated image of the Samsung SDS building in Jamsil, southern Seoul. The company relocated to the new building in 2014. [JOONGANG ILBO]

After maintaining a cautious stance last week, Samsung SDS confirmed Tuesday its intention to spin off its logistics business to reinforce the company’s global competitiveness.

“The company is reviewing spinning off the logistics business in order to enhance its global competitiveness and concentrate its capacity,” the company said in a regulatory filing on Tuesday based on the board meeting held in the morning.

A spokesman for the company, a key affiliate of Samsung Group, explained that the decision was inevitable for it to “expand the logistics business of the company, which is expecting to complete all the tasks requested from its affiliates, including Samsung Electronics, by the end of this year.”

The company refused to reveal further details about the future path of the separated department.

Industry insiders say the most likely move is a sale of the company’s IT department, its other key unit, to generate the cash needed to help the beleaguered company complete a merger with Samsung C&T at a 1:1 ratio.

“This way, Samsung SDS would evaporate, but it will eventually help the company buy more shares of Samsung Electronics, helping the merged company to act as a holding company for the group,” said Yoon Tae-ho, an analyst at Korea Investment & Securities.

Another possible scenario would be a split of the logistics and IT units of the company and then a sale to Samsung Electronics and Samsung C&T, respectively, which would make Samsung SDS nothing more than a paper company.

Yoon, however, said this move would be unlikely to gain shareholder approval.

If his stake in SDS gets acquired by C&T, it would further reinforce his control over the group.

Samsung SDS’s minority shareholders, on the other hand, are strongly opposed to the spinoff plan.

A group of some 20 disapproving shareholders paid a visit to SDS headquarters in Songpa District, southeastern Seoul, on Tuesday evening. The group asked Samsung executives for an explanation and compensation for the recent losses in share values.

“We disapprove of SDS’s decision to split the company’s main logistics segment, which has the clear intention of reinforcing the authority of the Samsung family,” a group of minority shareholders posted on its online blog Saturday.

Asserting that minority shareholders have been deceived by the company, which constantly reassured them the problematic merger would not happen and promised to foster the company’s growth, the shareholders launched an online petition, which has over 800 investors’ signatures as of press time.

“If Samsung SDS dumps its logistics business to Samsung C&T for a bargain price, we will not hesitate to roll out a class-action lawsuit,” the post added.

The minority shareholders were especially concerned that the current situation could be a repeat of last year, when Samsung C&T merged with Cheil Industries at an unfair ratio.

“The merger was rolled out with an unfavorable ratio for C&T, resulting in 523.8 billion won worth of losses by minority shareholders, while Samsung Chairman Lee Kun-hee’s family raked in up to 371.8 billion won,” it said.

The logistics business has been a driving force behind Samsung SDS, which alone is expecting to post 3 trillion won in sales this year.

When Samsung SDS first added the business to its portfolio in 2012, it accounted for just 10 percent of the company’s sales.

The company at the time was focused exclusively on IT.