‘National defense or cruise ships can be our alternatives’

‘National defense or cruise ships can be our alternatives’ 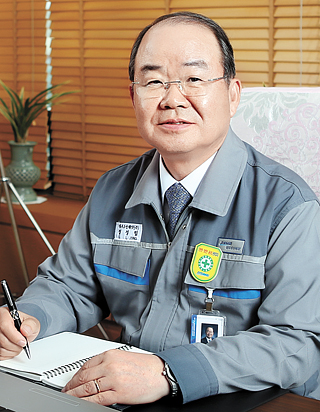 Everyone is saying bad things about Daewoo Shipbuilding & Marine Engineering (DSME) nowadays. In the past, the shipbuilder used the slogan “the world is big and there is much to do” while expanding its business overseas. Indeed, DSME was once one of the biggest shipbuilders in the world, but people now think of the company as something of a public enemy.

What kind of company is DSME? Can they really get back to where they were before? JoongAng Sunday interviewed Jung Sung-leep, CEO of the company, to hear more about it.

Jung was born in 1950 in Seoul. He graduated from Gyeonggi High School and Seoul National University, majoring in shipbuilding.
He enjoys drinking alcohol with others, regardless of what when or where they are. The fact that he drank with 50 labor union members the day he was appointed to the board of directors at DSME’s human resource department remains a legendary story in the company.


Q. I guess you will live a long life since so many people out there are saying bad things about you…

A. Well, I feel bad for saying this but I can take a blow very well. I sleep and eat well and drink alcohol. Building a ship is something very dangerous and a fragile person would have a hard time making it one day here. One needs to be somewhat wild. I have been working in this industry my whole life. I have become a true sailor now. However, I really wish people could just wait and see how we get through this instead of just saying bad things about us.

Your views are different from what many Koreans think.

No. I am having a hard time as well. DSME is, deep in my heart, my hometown. How can one be happy if one’s hometown is in a life-or-death situation? Well, the sun always shines after the rain, and in fact, the rain that is pouring right now can give us nourishment.

We had to change ourselves before someone else forced us to do so. We failed to do it and we are going through hardship right now. We are living in a world where everyone is competing fiercely, and it is harder for companies to live through this. If you look at someone who is crying, you might think he or she is just crying. But someone who is crying is actually very sad feelings when they cry.

It is better to try something than to do nothing. I am here as a relief pitcher. I am trying to do something now and I believe we will get through this.

I have read through some of your past speeches and you were mostly optimistic about the company. Many of them turned out to be wrong.

From 2008 to mid-2010s, our sales recorded 11 trillion won [$9.3 billion) to 12 trillion won, and our operating profit was as high as 1 trillion won. In Geoje, [where the company is located], people were saying even street dogs are carrying 50,000 won bills. I have to accept that we didn’t foresee the future very well. The shipbuilding industry started in the United Kingdom and moved to Northern European countries and then to Japan. Korea took over the and it is now going to China. It is a labor-intensive industry, and Koreans are the best in the world for doing jobs using their manual dexterity. That is why everybody was so optimistic back then. No one knew that the world would change this rapidly.

Does this mean there is no future?

No. Flowers bloom even after a storm. What I want to say was that the industry won’t do as great as it did in the past. And we do have to accept that the shipbuilding industry is not a growing industry anymore.

In the short-term, the industry does have a future but it won’t be like what it was in the past. We have to focus on making high value products from now on. We need to start making high-tech ships rather than focusing on large ships.

Ships related to national defense or cruise ships can be our alternatives. European shipbuilders are enjoying making profits through the cruise ship industry, and the United States is very strong in manufacturing warships.

How strong is China in the shipbuilding industry?

They are growing rapidly and maybe it is not that much of a surprise. As I mentioned earlier, shipbuilding is a labor-intensive industry and the industry slows down when people in general earn more money. It is happening to us right now and it has happened to various other countries in the past.

What is interesting about China is that all other industries are growing at the same time. In this case, relatively more talented people try to work in electronics or finance sectors instead of shipbuilding. This is why China still hasn’t been able to catch up with our technology yet. We need to transform into something new while we are still ahead of China.

Now, I want to talk to you about some moral hazard issues.

I have no excuses. It is not possible to forgive one for spending the company’s money like water. Our workers, on the other hand, have no faults but to follow orders from the top. DSME is a nice car, but the driver made mistakes and had an accident. However, I do not agree with the idea that we have to scrap the car since the car actually is still drivable.

I am currently trying to get out of the hell of having 20,000 people with a defeatist attitude. We can neither get out of this right away nor just fall down. But we shouldn’t jump around with panic. I wish others who are punching at us would let us save up some energy so that we can actually move forward. DSME is still sailing and we are seeing the light of hope in the dark.

You are still very optimistic.

No. I have proof. We have the best technology for liquefied natural gas (LNG) vessels. There are more than 40,000 well-trained people working at our dockyard. Defeatism doesn’t help anything. The problem is the price of crude oil. None of the experts around the world thought that the price would fall by this much. The reason why we were able to be successful in 2010 was because of the high crude prices that were trading at over $100 a barrel. We continued to receive orders for large-sized vessels that extract crude oil under the sea.

The crude oil price is actually going up recently, but it will be difficult for it to hit the $100 level again. I think it will be traded between $50 and $70 a barrel in a long-run. We need to build a ship based on that. Every five years, the shipbuilding industry does well and then struggles and back and forth. Now, what is different is that China has entered the market. We are struggling right now since we weren’t able to foresee this coming. It is slow but we are recovering. If we successfully climb up the hill, there will be apricots waiting.

I heard that you got married without finding a jeonse home [long-term housing deposit rent contract]. Are you always that laid-back?

My father was a soldier. He graduated from the Korea Military Academy and he was in the same class with two-time former Prime Minister Kim Jong-pil. He retired from the army before the May 16 coup so he didn’t have a chance to enjoy power. My father-in-law was also in the army. Both sides of my family worked for the army and one needs to understand that we have some guts and are easygoing at the same time. People that know me well often say I can take blows very well. Do you think I can take the role as captain of a wrecked ship if I wasn’t like that? I started to work at a bank after graduating and then I moved to Donghae Shipbuilding. Ever since then I lived my life with ships. Ships are my destiny.