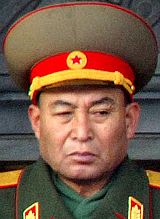 TOKYO - Ri Yong-ho, former chief of the general staff of the North Korean army, was relieved of his duties in July 2012 because of his unilateral mobilization of a military unit without Kim Jong-un’s consent, reported the Japanese news broadcaster NHK.

In a program on the North Korean leadership, aired on Sunday, the broadcaster reported that Ri, a confidant of late Kim Jong-il, the father of Jong-un, had fallen from the power because he had “changed the movement of a military unit without Kim Jong-un’s approval.”

The NHK said the military unit had partaken in a parade when Ri unilaterally ordered for mobilization.

The Japanese broadcaster’s revelation over the former general’s fate came after it had obtained a thumb drive containing 12,000 pages of documents composed by the Organization & Guidance Department of the Workers’ Party in Pyongyang, describing inner-circles and power structure of the North’s military and ruling party.

The NHK reported it had discovered the information concerning Ri while analyzing a file saved in the thumb drive with three North Korea experts.

The broadcaster said it had received the thumb drive from a senior official working in the trade sector for the North Korean army two years ago, without elaborating further.

If true, it would be the first accurate report on what had led to Ri’s downfall from power less than a year after Kim Jong-un took over the country following his father’s death in December 2011.

The North Korean media reported at the time that Ri was stepping down due to “illness.” Reports in South Korea soon followed that Ri was, in fact, purged and had been placed under house arrest.

Ri, born in 1942, was known as a childhood friend of Kim Jong-il and military hardliner who had risen through the ranks under the leadership of Kim Il Sung, the state founder.

Ri’s sudden disappearance in July 2012 was seen as a test of Kim Jong-un’s leadership and his attempt to solidify his grip on power by ridding officials who might post a challenge to his untested leadership.

In the documents, Ri was depicted as “an anti-revolutionary” whose “order for his subordinates went against intentions and philosophies of the supreme leader,” in reference to Kim Jong-un.

Ri’s characterization is tantamount to that of Jang Song-thaek, the uncle and once the right-hand man of Kim Jong-un, who was executed on anti-revolutionary and state charges by his nephew in December 2013, 17 months after Ri’s reported purge. While light has been cast on Ri’s fate, it remains unclear whether he is in exile, imprisoned or has already been executed.

The documents also reportedly contained sections describing purges of officials who had expressed doubts over Pyongyang’s pursuit of satellite launches, which experts say is a cover-up for long-range missile tests.

“Set up a system in which all information on military units ends up on my desk,” Kim Jong-un was quoted as saying in the reported documents.