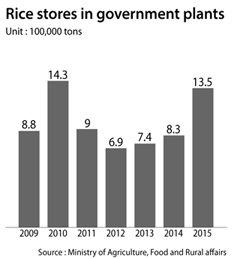 As rice consumption is now half of what it was in 1985, the rice surplus is driving down prices and pushing rice-processing plants to the verge of bankruptcy.

“Demand for rice decreased over the years,” said Shin Doo-young, head of the Nonghyup (National Agricultural Cooperative Federation) in Cheongsan County, “and so did the price.”

As a result, Nonghyup’s Rice Processing Complex in North Chungcheong, which has been buying rice produced in that region and selling it since its foundation in 1996, made the decision to close on Tuesday.

According to a report by Statistics Korea, annual consumption per person has plummeted to 62.9 kilograms. The consumption of vegetables and fruit and other grains such as barley and wheat, meanwhile, has gone up while meat has seen a four-fold increase over the past 30 years.

As the total amount of rice harvested reaches the highest level since 2009, with nearly 4.3 million tons last year, the discrepancy has grown to be quite more than Nonghyup and Rice Processing Complex can handle.

The rice stockpile topped 1.83 million tons in February, which is more than twice the amount recommended by the UN Food and Agricultural Organization. At this rate, the unconsumed rice at the end of the year will be as much as 350,000 tons.

To dispose of its stock, members of Nonghyup in North Chungcheong are selling off rice at fire sale prices. Among the 224 rice-processing plants across the country, 149 are run by agricultural federations and other 79 are privately run.

According to research by the Ministry of Agriculture, Food and Rural Affairs, in 2014, 57 percent of the federation’s plants and 5.4 percent of private plants experienced a deficit.

Half of the 24 rice-processing plants in Chungcheong are running at a loss. Kang Moon-gyu, head of the Wookang Nonghyup, said, “To minimize the damage to federation farmers, we pay 1,000 to 5,000 won more per 40 kilograms of rice than private plants do. That is one of the reasons our management is having a hard time.”

“We are supplying rice-processing plants with money to improve their facilities and we’re lending money to help them purchase rice based on analysis of each plant,” Bae Woo-yong, deputy director for the Ministry of Agriculture, Food and Rural Affairs, said. “The plants will need to improve themselves through adequate merging and scaling.”