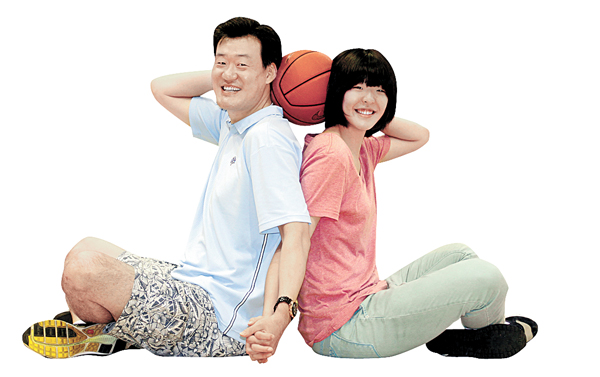 Park Sang-kwan, left, was a star center for the Seoul Samsung Thunders, and his daughter Park Ji-su, right, is a rising star for the Korean national team. [JOONGANG PHOTO]

At this point, the only thing taller than basketballer Park Ji-su is the expectation for her contributions to the sport in Korea.

Standing at 1.95 meters (six foot four), the 18-year old Bundang Management High School student has been called the future of Korean women’s basketball, and she feels ready to prove that at the upcoming Summer Olympics in Rio.

Park was just a middle school student when she first stepped into the Jincheon National Training Center, a venue constructed to supplement the otherwise saturated Taeneung National Training Center, in 2013. Everything seemed strange, and it wasn’t easy training with players more than 10 years older. Park grew more timid by the day and often cried herself to sleep at night.

Three years have passed since then, and Park has added three centimeters to her height. But more than that, she’s grown more mature. Not only is she more vocal on the court, but she is more than willing to approach her elders when she needs help. 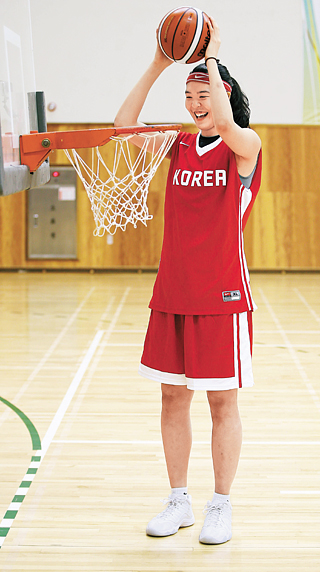 Now, just ahead of the 2016 Summer Olympics, the 18-year-old center is preparing for the final round of qualifiers slated to take place June 13-19 in Nantes, France. Twelve teams from each continent who were unable to secure their ticket to Rio during the regional qualifiers will participate in the tournament. Out of the 12, the five top teams will compete in the Summer Games. Korea is assigned to Group C along with Belarus and Nigeria.

“I want to play in the Olympics,” said Park. “Basketball is all I can think about these days.”

Since middle school, Park has been seen as an up-and-comer for the Korean women’s basketball team. She was said to have the potential to become a vital asset for the team under the basket. At the age of 14, she ranked first in blocked shots at the 2012 International Basketball Federation (FIBA) U-17 World Championship with an average 3.9 blocks. Since then, her name was often spotted at the top of various rankings, including rebounds and blocks. But she also boasts agility and mobility, which are rare traits amongst tall players such as Park.

Park became the youngest player in the Korean basketball history to qualify for the national team after being listed on the pre-roster at the age of 15 years and seven months. She has even caught the attention of FIBA, basketball’s governing body, which has called her a “teenage sensation” and a “phenomenally talented center.”

While it is Park’s work ethic that brought her into the spotlight, there is another secret behind her success: her family genes.

“Since I started playing basketball in second grade, I grew about 10 centimeters each year,” said Park.

“My optimistic personality comes from my mother,” Park said. “But my toughness on the court, that came from my father.”

It hasn’t always been smooth sailing for Park, who always felt burdened by the title “rising star.”

One of her toughest moments was when she injured her ankle in middle school, putting a halt to her dream of playing in the United States. It took a while for Park to regain her confidence.

“The recovery period took longer than I thought, but all I heard from everyone around me was, ‘When will you go to the United States to play basketball?’” Park remembers. “I wanted to quit the sport but my former coach cheered me on and that made me keep playing.”

All that is in the past now, and Park’s latest lessons have been in the importance of self-development. Feeling as though her stamina wasn’t up to par, she began to train with weights.

According to her coach, “Park will join the professional league soon and she cannot be always sheltered and led by others.” He emphasized the importance of Park learning to become a better player on her own.

But in the meantime, Park is focused on another player: Park Chan-sook.

The now-retired center played the critical role when the Korean women’s national team claimed silver during the 1984 Summer Games in Los Angeles. Just like her, Park is determined to leave her mark on Korean basketball history.